The Latest Scoop: Recipes for Cheesecake Ice-Cream and Brownie Bowls 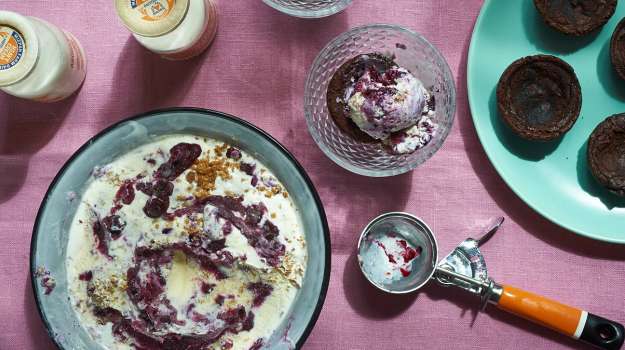 You can try other cheesecake and fruit combinations. Strawberry can be a bit tired and blandly sweet, but raspberries and blackcurrants would be good alternatives. Photograph: Jill Mead for the Guardian

Summer’s the time for slurping ices and lollies straight off the stick, but sometimes homemade ice-cream – the kind that demands dainty bowls and tiny spoons – is called for. Try this cheesecake-inspired tub with honeyed edible bowls.

I'd be the last person to disparage anyone who wants to fill their summer with whippy ice-cream cones, brain-freezing bubblegum ice lollies and cheap luminescent lemon sorbet. These cheap thrills are what summer is made for, and I've never been able to let the discordant jangle of the ice-cream van go unanswered.

But, for the days when you do want a different kind of ice-cream " the sort that you can dish out into the good crockery and savour by the teaspoon " here are a couple of recipes that belong somewhere between the bakery and the ice-cream parlour. The first has been inspired by a fruity cheesecake, the second is served up in a fudgy brownie bowl.

Cheesecake is rich, ice-cream is rich " put them together and they run the risk of becoming a sort of pudding Frankenstein's monster, a runaway train of stodge. But be careful and balance your flavours wisely and you can create something really special. Here, I've matched the best of cheesecake's sweet tang with the melting smoothness of ice-cream, swirling through a bright blueberry compote and chunks of biscuit base for texture.

Though this is a million miles in terms of flavour from those mean-spirited, half-hearted cheesecake ice-creams you find in the shops, it takes a little work to get a scoopable consistency when making this yourself. Even a basic ice-cream maker (the cheapest come in at about "£40) will work wonders, but you can cope without as long as you're able to stir the ice-cream regularly (and vigorously) as it freezes. Leave it unchurned and it'll set in a solid block.

2 Heat the milk over a low heat until scalding hot. Meanwhile, whisk the egg yolks, caster sugar and cornflour together in a large bowl.

3 Once the milk's hot and the egg yolks are smoothly mixed, slowly pour the milk into the yolks, whisking continuously. Decant this custard back into the pan and cook over a low heat, stirring nonstop, until it's of a thick, but pourable, consistency. Tip into a clean bowl to cool to room temperature. Stir gently from time to time to stop a skin from forming.

4 Meanwhile, combine the blueberries and sugar in a small pan with a splash of water and cook gently until the blueberries are bursting. Whisk the cornflour with 2 tsp of water in a separate bowl, then stir this into the blueberry mixture. Cook the compote for a further minute to thicken the juices, then remove from the heat and leave to cool.

5 Finely crush the digestive biscuits and stir together with the melted butter. Press firmly on to a baking tray in a layer a little less than 1cm thick and bake for 10 minutes. Leave to cool.

6 Beat the cream cheese, sour cream, double cream and vanilla extract together until smooth, then whisk in the cooled custard mixture. Decant into a large, lidded plastic tub " the wider and shallower, the better " and place in the fridge to chill. Once chilled, place in the freezer and beat vigorously at 30-minute intervals for the first 2-3 hours, and then each hour until it's very thick and almost completely frozen.

7 Stir the blueberries very gently through the ice-cream once it's nearly frozen, and crumble the biscuit base through in crumbs and chunks. Work slowly and don't overmix, or the swirls will lose their definition and bleed into the ice-cream. Leave to freeze completely. Soften for 10 minutes before serving.

These dense, sticky, honey chocolate brownies double as little ice-cream bowls, pressed into shape under the back of a muffin tin. You won't want to do away with the real bowls completely just yet or you'll find yourself with rivulets of melted ice-cream running down your fingers and brownie crumbs across the table. Just see these as a smarter way to serve dessert " especially when the cake's still a little warm. Making brownies in muffin tins cuts the baking time, so is an easy cheat if you're pressed for time, even if you don't want to shape them into bowls.

1 Preheat the oven to 180C/350F/gas mark 4. Beat the butter, honey, sugar and eggs together in a large mixing bowl until smooth. Combine the flour, cocoa powder, baking powder and salt in a separate bowl, then combine the two mixtures to give a smooth, glossy batter.

2 Thoroughly grease the moulds of a 12-hole muffin tin and spoon a little of the batter into each " enough to fill them halfway. Bake for 17-20 minutes, or until set around the edges and risen " but still slightly underdone " in the middle. Meanwhile, grease the underside of a second muffin tin with butter, around the bottom and sides of the outside of each mould.

3 As soon as you take the brownies from the oven, press the other muffin tin firmly down on to the brownies, flattening the centres of the cakes and causing their edges to splay up. After holding the tin in place for a few seconds, slowly remove it to reveal the bowl-shaped brownies. If the indentations aren't deep enough, just regrease the underside of the tin and press it in again.

4 Leave to cool completely before unmoulding and serving, heaped with ice-cream.