The science behind stuffing your face at Christmas 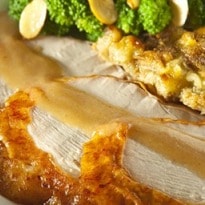 Feeling full, psychology and how festive food and drink make a monster of your appetite

The amount of food we can put away on Christmas day is as impressive as it is excessive. Chocolates and mince pies are fair game 24/7. Savoury nibbles are needed shortly after breakfast, to soak up the mid-morning livener. And then, shockingly soon after lunch and all its trimmings, as soon as someone breaks out the pickled onions, I'm off again. And so it continues.

One reason we can keep putting it away like this is a phenomenon called sensory specific satiety (SSS). We can have enough of one sort of food, but still have an appetite for something else. It lies at the root of the expression "pudding stomach". It is why the trend for small sharing plates is a restaurateur's dream and a slimmer's nightmare. It is why kids suddenly declare: "I don't like it," while eating a food they definitely like.

The thinking behind SSS is that because humans are omnivores, and we must eat a variety of foods to survive, we evolved this mechanism to keep us from sticking doggedly to our favourite food and consequently getting ill, and/or prematurely popping our clogs. Marion Hetheringon, professor of biospychology at the University of Leeds, describes the process nicely: "If I'm eating a food like pasta, it will taste good at the beginning. Then when I'm halfway through it doesn't taste quite as good - I might add some more sauce to make it taste better, or I might say I'm going to switch to salad now - I've had enough of the pasta." This happens subconsciously. In fact even people with amnesia who not only forget what they've just eaten, but have no idea whether they've eaten at all, still express SSS. Served repeated, identical meals, they will continue to eat them, but they find them increasingly unpleasant.

Adding the sauce in Hetherington's pasta example is an attempt to override SSS. While SSS happens automatically, we might consciously decide that we want to keep eating the food a little longer and enter into an internal tug of war. It seems that we can foil SSS pretty easily. One study back in the 1980s found that once people feel satiated from eating red Smarties, if presented with yellow Smarties (which taste and smell identical), they will suddenly get their appetite back. And more recently, Laurent Brondel at the European Centre for Taste Sciences in Dijon observed that simply introducing a condiment can be enough: "I gave subjects some french fries," he tells me, "and when they didn't want them any more, I put some ketchup near the french fries and then the subjects starting eating them again." His team did the same with chocolate brownies, and introducing vanilla ice cream led to greater consumption (although, controversially, whipped cream did not).

Who sates most quickly?

Babies and young people have exhibited greater SSS in studies. Brondel says that infants, between weaning and two years of age (after which hedonic and external influences take hold), will choose all the foods they need from a variety put in front of them - they won't simply eat the one food that tastes the best. "This is a period of diversification, during which they are very sensitive to their internal nutritional state and needs," he adds.

"Children tend to show sensory specific satiety quite strongly," says Hetherington, and therefore forcing them to finish something they don't want could be detrimental. "If parents are trying to override internal signals, the child will become more used to environmental signals to determine how much they eat, rather than their own internal signals of hunger and satiety." Obviously this is all "within reason" - if, say, there's a purple jelly rabbit on the table, it might not be SSS that's putting the kids off their broccoli.

Much of the work on SSS has involved eating disorders. "Patients with anorexia show it very strongly," says Hetherington, "whereas people with bulimia show it quite weakly." But no one knows whether the inflated or decreased SSS are symptoms or causes of these conditions.

Just as our innate preference for sweet things served us brilliantly in driving us to seek out energy-giving foods back in the good old days before we were surrounded by cheap sweets, SSS also somewhat backfires in the modern world. With such a wide variety of easily accessible food, and with restaurants offering as many courses as you want, SSS makes overeating pleasurable.

The trouble with turkey leftovers

When you have to eat a certain food every day, no matter how much you like it, long-term SSS can set in. "There's also a long-term phenomenon called monotony," says Hetherington, "which is different to SSS but means that by day three, you are not going to fancy turkey again." On the plus side, if there are only leftovers on offer, you will probably eat less for a few days. Perhaps, to speculate wildly, the combined effects of SSS and monotony are what makes it nearly impossible to fashion the turkey into something that tastes delicious in the immediate aftermath of Christmas, no matter how you dress it up. Have you every truly succeeded in this task?

Photo: Christmas dinner: you might not feel as full as you think afterwards