Three Michelin Stars for 'Ledoyen' and 'La Bouitte' in France 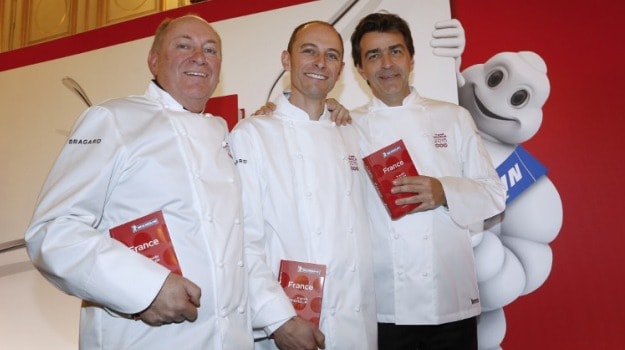 "La Bouitte" in the French Alps, run by father-and-son team Rene and Maxime Meilleur, and Yannick Alleno's Parisian restaurant "Ledoyen" joined the pantheon of top eateries in the self-styled bible of gastronomy.

Rene, 64, and Maxime, 39, were awarded the industry's top prize for their "extraordinary" skills with fish, said Michael Ellis, director of international guides for Michelin.

The food bible hailed the Alpine chalet restaurant, located at an altitude of 1,500 metres (5,000 feet), as "generous, authentic and full of emotion". The fishy delights on the menu include trout, scallops and crawfish, while meat eaters can tuck into frogs' legs with black garlic and watercress, duck foie gras escalope, sweetbreads and venison.

But such three-star cuisine does not come cheap. A three-course "surprise" menu will set you back 115 euros ($130), while an eight-course banquet weighs in at 225 euros. The restaurant has come a long way in 40 years from its beginnings as a refilling stop for skiiers, serving them raclette and fondu. "I turn 40 this year," said Maxime. "This is really a great present. All the empty tables will be full from now on."

Away from the snowy mountains, "Ledoyen", near the capital's famed Champs Elysees, retained its three-star status but with a new chef, the 46-year-old Alleno, at the pass.

Alleno, who already won three stars in 2007 for his work at "Le Meurice" in Paris, was cited for his skill with sauces.

He has perfected an "extraction" technique for sauces, resulting in an ultra-pure jus with an intense flavour. "We found a Yannick Alleno at the top of his game," said Ellis. "The techniques have been mastered in an extraordinary fashion. The concentration and explosion of flavour are quite simply remarkable," he added.

He singled out for special praise a souffle of smoked eel with a watercress reduction and a brioche of pike with celery extract.

"These three stars have a special flavour," said Alleno. "It's the first time I have been recognised as a head chef." While the champagne corks were popping there, others were left crying into their soup as they were demoted to "mere" two-star status. The "Arnsbourg" in eastern France was relegated from three stars to two following the departure of chef Jean-Georges Klein. And "La Cote Saint-Jacques", in central France, had a star removed due to a "lack of consistency in certain dishes".

In total, there are now 609 Michelin-starred restaurants in France. The criterion for winning three stars is that the restaurant must serve up "exceptional cuisine, worth a special journey." The three previous editions of the guide crowned one new three-starred chef each and none in 2011.

Last year, the most coveted accolade in gastronomy went to Arnaud Lallement, of the family-run "L'Assiette Champenoise" near Reims in the Champagne region of northeastern France. The new guide was unveiled at the French foreign ministry, which is determined to maintain the country's reputation as the top destination for foodies.

Last week, an American food critic threw salt in Michelin's sauce by declaring that most of the top Paris listings were not worth their exorbitant prices. Meg Zimbeck, who runs Paris By Mouth, a respected online review site that also provides foodie tours to English-speaking visitors, backed up her argument with research: four months of anonymous dining in all Paris restaurants boasting two or three Michelin stars.

What she found, after booking into 16 restaurants under false names and paying a total 7,150 euros for the meals, was that Michelin's recommendations didn't always deliver.