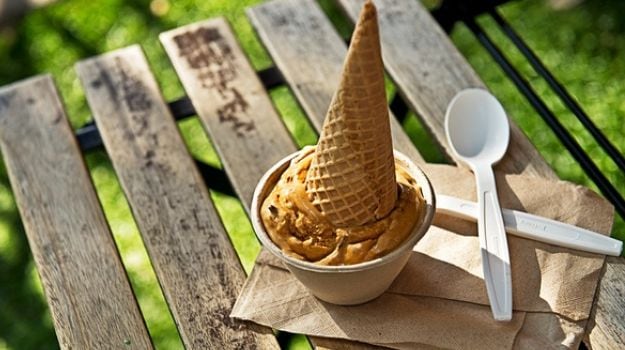 Upside down cone: the convenience of the cup, with the crunch of the cone. Photograph: Devon Knight for The Guardian

Why get an ice cream cone dumped onto a secondary vessel? It may be cleaner and award you with more ice cream, but it’s also ridiculous and anti-American.​

Earlier this week I got a note from a friend alerting me to a disturbing new development in the ice cream business. This summer, she said, she'd been seeing people eating scoops of ice cream off of plates or out of bowls, with a cone sticking up off the top. Upside down ice cream cones, essentially.

This struck me as an odd, though slightly familiar, choice for people to make. Why get an ice cream cone dumped onto a secondary vessel like that? It defeats the purpose of the cone, doesn't it? What a shame; what a waste " the ice cream cone is one of the great food inventions in US history.

My friend wondered if it was a cleanliness issue, or a sales gimmick. Like: "OMG! Our portions are so GINORMOUS, they won't even fit on their cones anymore!!!"

She sent me some photos of these upside down cones. One of them was from a shop down the street from my house, so I took a walk there.

Sure enough, though the place was pretty empty (it was mid-afternoon) the one person in line ahead of me got a medium cup of ice cream with a sugar cone propped on top. I got my own order and followed him out to the patio, where he took a table. The ice cream flavor he had chosen was called the Munchies (it had pretzels, Ritz crackers, potato chips and M&Ms mixed into it) so I figured he was high on pot. Maybe that was what was going on. With marijuana laws relaxing nationwide, maybe everybody's just getting so stoned that they forget how to eat an ice cream cone. (This recent picture of Joe Biden in Colorado with an upside down cone last month would support this theory.)

I tried my best to watch the guy surreptitiously. I didn't want to freak him out. I'm sure he was pretty paranoid already; the last thing he needed was to see a devilishly handsome undercover ice cream detective spying on him from the next table over.

Early in his process, he took the cone off the ice cream and held it in his fingers while he ate with with his spoon. This required holding the cone the same hand he was holding his cup, like how some people hold a cigarette and a drink in the same hand at a bar. It didn't look easy. But he persevered, and ate the cone like a cookie, breaking himself off cracker-sized chips when he was done.

The next day I went back to the ice cream shop and asked a woman behind the counter whether people often ordered their ice cream cones turned upside down in cups. She said yes. I asked her if she had any idea why.

"I think maybe they want the convenience of the cup, but still want the crunch of the cone."

Sounded reasonable, I supposed, albeit extremely lazy. And there was still the problem of where to put the cone while you ate.

I ordered a large cone and asked that it be put upside down into a cup. The whole thing was stupid. The cone just got in the way of my spoon. I then tried to use the cone as a spoon. That didn't work at all. The top of the cone bumped into my nose upon every approach. There's a reason spoons don't have roofs. I ended up just packing my ice cream into the cone with my spoon and eating it like a sane person in a Norman Rockwell painting.

As it turns out, upside down cones aren't so new after all. Baskin Robbins (where president Obama once scooped ice cream for a living!) has been serving cones upside since the 1980s. They draw a smiley face on the bottom scoop with frosting when they do it, and make the cone into a tall, pointy hat. Like a dunce cap. For children's birthdays and stuff. They call it the "clown cone".

So the next time you see an adult eating ice cream in this ridiculous, frankly anti-American manner, you might want to stop him and say, as the frontrunner for this year's National League Most Valuable Player, Bryce Harper, or White House Press Secretary Josh Earnest might: "That's a clown cone, bro."