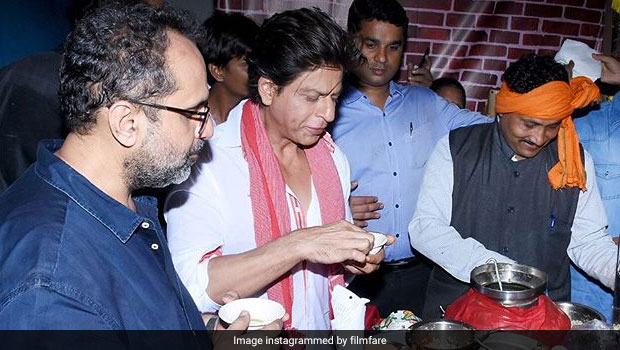 Shah Rukh Khan, who celebrated his 53rd birthday yesterday also delighted his fans by launching the trailer of his much-awaited release Zero, which also stars Anushka Sharma and Katrina Kaif. Directed by Anand L Rai, the movie has been the talk of the town for some months now, ever since the first teaser poster was unveiled. Shah Rukh, who is already winning hearts with his endearing character of Bauua Singh in the film, has been teasing his fans about the movie for several weeks. Now that the trailer is finally out, it is creating quite a splash online, with fans itching to watch the film which releases on December 21st 2018. The trailer was live screened on television and on the internet, with millions of eager fans watching from around the world. However, once the trailer launch was done, Shah Rukh Khan was captured enjoying some delicious street foods with director Anand L Rai.

The paparazzi at the event filmed the superstar enjoying pani puri or gol gappe, as well as pav bhaji at the trailer launch of Zero yesterday. After some time, the director also joined Shah Rukh Khan. However, what is endearing about the video is that Shah Rukh even offered a couple of gol gappas to the celeb photographers and journalists capturing him at the event! After one of the paparazzi asked him the gol gappas tasted, Shah Rukh said that they were really good and went aheand and popped one in one of the waiting photojournalists' mouth. He then handed some out into the crowd of photographers, for them to enjoy.

Here's the full video of Shah Rukh enjoying pani puri at the trailer launch of Zero:

The video truly captures the magnanimous spirit of Shah Rukh Khan, which makes him a favourite with millions of Bollywood fans around the world. Shah Rukh Khan has often confessed that he is a foodie and he loves indulging in North Indian food. The Delhi-born actor really likes everything that the capital city has to offer, in terms of delicious food. He enjoys junk food as much as he love home cooked food, but he refrains from indulging in high-calorie or unhealthy foods on a daily basis and instead keeps his meals high in proteins and low in carbohydrates. Khan is also really fond of coffee and has professed his love for the caffeinated beverage several times on social media. Well, we can't wait to watch Zero in theatres. What about you?