Shah Rukh Khan chose to spend his first salary on a visit to the Taj Mahal and the remainder on savouring a delectable pink lassi in Agra. 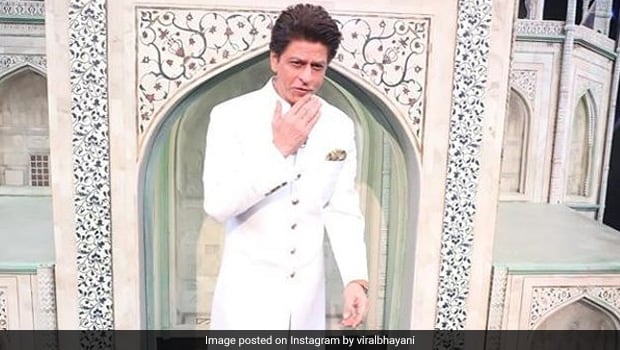 Shah Rukh Khan talked about his first visit to the Taj Mahal in Agra and the pink lassi he tried.

Shah Rukh Khan may have been away from the silver screen since his last film 'Zero', but that doesn't stop him from gracing our personal screens every now and then. Shah Rukh Khan has been more active as a producer than an actor in the recent past, but it's not like he has completely erased himself from the public memory. The actor had starred recently as a special guest in Netflix's David Letterman Show in the episode titled, 'My Next Guest Needs No Introduction.' He will also be back on the small screen as the main guest in the Republic Day-special episode of Remo D'Souza's dance-based reality show Dance Plus 5.

Shah Rukh Khan was spotted at the Filmistan Studio in Mumbai shooting for the special episode of the reality show. The actor was seen dressed in all-white, posing against the backdrop of the model structure of the Taj Mahal on the sets of the show. Shah Rukh Khan revealed on the show how he could never get a picture clicked with the real Taj Mahal. The actor then spoke about his first ever visit to the Taj Mahal with his first salary of INR 50. Although it was a significant amount at that time, a majority of the amount went towards purchasing the train ticket to Agra to see the Taj Mahal. Shah Rukh then chose to spend the remainder on savouring a delectable pink lassi.

(Also Read: Agra Ka Petha: The Indian Candy That is as Loved as Taj Mahal in Agra)

Pink lassi was the delicious and refreshing drink that Shah Rukh Khan tried at the Taj Mahal.

For the uninitiated, pink lassi is a specialty of Agra that is served in areas close to the Taj Mahal. It is a refreshing and appetising version of the Punjabi lassi, with strawberries added to it for that additional pink colour. Sweet rose sherbet or beetroot can also be added to the lassi for the colour. Sadly for Shah Rukh, though, the sweet pink lassi met with a tragic end. "A bee fell into it, but I still drank it and puked all through my return journey," revealed Shah Rukh Khan to Mumbai Mirror.

The fact that Shah Rukh Khan still drank up his pink lassi reveals how much it must have meant to him. After all, it was his way of celebrating his first salary. We hope the actor goes to visit the Taj Mahal again, and this time, he is able to finish his pink lassi without a bee falling into it.