Why do Some People Love 'Earthy' Flavours in Food? 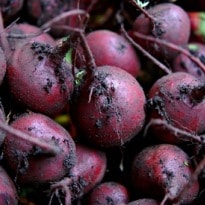 Do they, deep down, just want to eat dirt - indeed certain people do crave soil - or is there something more subtle going on?

I am all for earthy flavours. Just as there is a primal pleasure in sniffing the earthy air that rises up after it rains, and the baked-earth aroma that greets me when I step off a plane in a hot, humid country, I could happily devour muddy-tasting new potatoes, asparagus and freshwater trout until I burst. But what, precisely, is it that I am enjoying so much? Do I, deep down, just want to eat soil?

What soil and freshwater fish and new potatoes have in common is that they often contain geosmin, a protein produced by various bacteria and fungi. Humans are incredibly sensitive to its odour and can detect it at 0.1 parts per billion. If you mixed a teaspoon of it into 200 Olympic swimming pools, you'd still be able to smell it. It is not fully understood why we are so tuned in to geosmin. Perhaps there are some clues in the hypotheses that the aroma helps guide thirsty camels to desert oases, or that common fruit flies use it to determine whether the yeast they like to nibble off fermenting fruit is safe or toxic.

When earthiness is bad

When I say I love earthy flavours, I mean in context, of course: an earthy meringue is not a pleasant prospect. Beetroot haters often cite its "dirty" taste as offputting (I beg to differ). But then, to many people, geosmin is considered a taint in fish. It is certainly an unwelcome guest in alcoholic beverages. Beer and wine tasters will wince at even a hint of it. Geosmin-tainted drinking water is a common problem. The compound is synthesised by blue-green algae either in reservoirs or in the plumbing, so water from a tap that hasn't been used for a while might taste disturbingly earthy. Geosmin isn't a harmful substance in itself, it's just not what we expect drinks to taste of. There may be an elemental joy to be had from lolling about in the earthy waters of Hampstead Ladies' Pond, but I wouldn't deliberately imbibe them.

Lately, soil has been caught in the tractor beams of avant-garde chefs and environmentalists. The Soil Association recently staged a soil-tasting session in Bristol to raise awareness of the damage done by intensive farming, although this was a notional tasting. No soil was consumed. Some chefs, however, in their eagerness to get their hands dirty and bring diners ever closer to the earth, have been experimenting with the brown stuff. Japanese chef Yoshihiro Narisawa introduced the concept to Rene Redzepi's guests at his 2011 MAD Foodcamp (Noma was by then already serving "edible soil" made from nuts, raisins, mushrooms and what have you). Narisawa told the crowd that he was surprised to find he liked the soup he had made with distilled soil which, cooked properly, tastes great. As well as the earthiness, it is rich in umami. The Girona restaurant Celler de Can Roca ("the next El Bulli"), has also successfully dabbled with soil. It is only a matter of time before the trend reaches critical mass and Heinz baked beans bring out a limited-edition soil flavour. Mark my words.

Geophagy has been going on in the real world for donkey's years. It's sometimes known as pica syndrome. Sera Young, of the Nutritional Sciences division of Cornell University has found after years of research into the topic, that people are "extremely picky about the earth they eat". They often moisten the earth and sniff it to test its quality - geosmin being the irresistible aroma they're looking for. One woman Young interviewed said that her mother used to have to close the windows after it rained to try to stop her rushing straight out with a spoon.

It's still not understood why people crave earth, but we do know that the practice is most common among pregnant women and children, and in the tropics. A common theory was that it could boost iron levels in people with anemia, but the evidence now implies the opposite. Not only is the iron in the earth not absorbed when eaten, eating earth actually seems to cause anemia.

The hypothesis that makes most sense to Young is that eating earth can protect against disease and toxins by binding with them (and possibly iron, too) so that they pass through the body. Some microorganisms in the soil also produce antibiotics. This would explain why pregnant women and children crave earth the most because they're the most biologically vulnerable. When your cells are dividing rapidly, explains Young, you're more susceptible to infection. It also fits that pica is commonest in the tropics where pathogens thrive.

It happens everywhere though. Among some populations in America, says Young, 60% of pregnant women eat earth. And according to a new documentary Eat White Dirt, it's undergoing quite a revival in America's Deep South. Have you ever craved soil? How do you rate earthy foods: delicious or dirty?