Why You Should Eat Yogurt Every Day 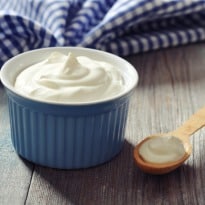 Recently, there was a study conducted at the University of Cambridge which claimed that low-fat fermented dairy products can reduce the risk of developing type 2 diabetes. Previous research also suggests that calcium, magnesium, or specific fatty acids present in dairy products may help. Now, a latest study particularly highlights the benefits of consuming yogurt and adds to the existing evidence.

The study, conducted at Harvard School of Public Health in the United states, finds that consumption of a serving of yogurt (about 28 grams) daily is associated with an 18 percent lower risk of Type 2 diabetes. The study appeared in the journal BMC Medicine and states that probiotics and antioxidants in yogurt may have a positive effect.

Type 2 diabetes is a chronic ailment that occurs when the body does not produce enough insulin, or the body's cells develop resistance to insulin. About 90% of all cases of diabetes worldwide are of this type. Obesity and lack of physical activity are two of the most common causes, but your genetic disposition may also put you at risk.

According to Senior Researcher Frank Hu, "Our findings suggest that yogurt can be incorporated into a healthy dietary pattern. We found that higher intake of yogurt is associated with a reduced risk of Type 2 diabetes, whereas other dairy foods and consumption of total dairy did not show this association." (Why Yogurt is Good for You)

Previously, it has been seen that probiotic bacteria found in yoghurt improves fat profiles and antioxidant status in people with Type 2 diabetes and researchers suggest that this could protect one against diabetes.

This conclusion is based on the results of three prospective cohort studies that followed the medical history and lifestyle habits of health professionals. These studies involved a total of 289,900 participants. "Our study benefited from having such a large sample size, high rates of follow up and repeated assessment of dietary and lifestyle factors," said Mu Chen, the study's lead author.

Promoted
Listen to the latest songs, only on JioSaavn.com
During the follow-up period, 15,156 cases of Type 2 diabetes were identified. After taking into consideration factors like age, BMI (body mass index) and dietary habits, it was found that high consumption of yogurt was associated with a lower risk of developing Type 2 diabetes. (10 Things You Can Make With Yogurt)

However, they did not find that dairy consumption in general affected the risk of diabetes indicating that these positive effects were specifically linked to consumption of yogurt.