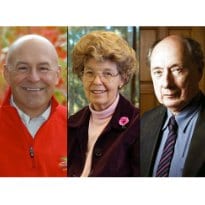 This year's World Food Prize is going to a Belgian scientist and two researchers in the United States for their innovations that brought the world genetically modified crops.

The prize organizers say the technology that allows for the stable transfer of genes into plant cells has improved yields, resistance to insects and disease, and tolerance of extreme climate variations.

Listen to the latest songs, only on JioSaavn.com
Sharing the prize are Marc Van Montagu of Belgium; Mary-Dell Chilton, a researcher at biotechnology company Syngenta; and Robert Fraley, chief technology officer at Monsanto.Van Montagu and Chilton independently developed the technology in the 1980s. Fraley genetically engineered the first herbicide-resistant soybeans, meaning farmers can spray their fields to kill weeds while leaving their soybean plants intact.