The Nobel Peace Prize 2020 has been awarded to the World Food Programme (WFP) for its contribution towards achievement of food security. 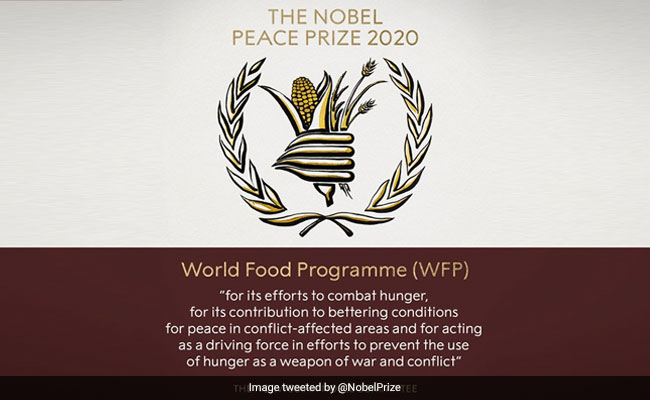 World Food Programme has consciously worked towards eradication of hunger.

The Nobel Peace Prize 2020 has been awarded to the World Food Programme (WFP) for its contribution towards achievement of food security. The World Food Programme is one of the largest organisations in the world that was founded to combat the worldwide hunger crisis. It is also one of the United Nation's largest special agencies. The announcement of the award was made in Oslo on October 9th in a press release as well as on social media by the Norwegian Nobel Committee.

The coronavirus pandemic has contributed to a strong upsurge in the number of victims of hunger in the world. In the face of the pandemic, 2020 #NobelPrize laureate the World Food Programme @WFP has demonstrated an impressive ability to intensify its efforts.#NobelPeacePrizepic.twitter.com/DnMLqFO9P4

The official release on the Nobel Prize website reads, "The Norwegian Nobel Committee has decided to award the Nobel Peace Prize for 2020 to the World Food Programme (WFP) for its efforts to combat hunger, for its contribution to bettering conditions for peace in conflict-affected areas and for acting as a driving force in efforts to prevent the use of hunger as a weapon of war and conflict." The World Food Programme will be awarded a diploma, a gold medal, and a cheque for 10 million Swedish Kronor as part of the prize. This is the 12th time that a UN body has been awarded the Nobel Peace Prize, which is more than any other.

The United Nations had recognised 'Zero Hunger' as the second goal of its 17 Sustainable Development Goals in 2015 which are to be achieved by the year 2030. "There are 821 million people estimated to be chronically undernourished as of 2017, often as a direct consequence of environmental degradation, drought and biodiversity loss," as per the United Nation's website. A recent report by the UN says that an additional 83 to 132 million people have been pushed into hunger due to the ongoing health crisis.

The World Food Programme has consciously worked towards this goal by providing sustenance to up to 100 million people living across 88 countries. The body has worked towards not just reducing hunger, but humanitarian efforts to restore peace and stability in areas of conflict. Its work is even more commendable keeping in mind the scores of people who went hungry during the wake of the Coronavirus pandemic.

Deepest thanks @NobelPrize for honouring the World Food Programme with the 2020 #NobelPeacePrize.

This is a powerful reminder to the world that peace and #ZeroHunger go hand-in-hand. https://t.co/1CYXPcnvlF

"With this year's award, the Norwegian Nobel Committee wishes to turn the eyes of the world towards the millions of people who suffer from or face the threat of hunger. The World Food Programme plays a key role in multilateral cooperation on making food security an instrument of peace, and has made a strong contribution towards mobilising UN Member States to combat the use of hunger as a weapon of war and conflict," read the official statement.