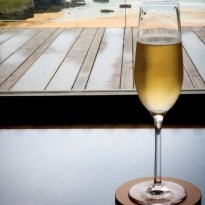 Connoisseurs have long advocated its benefits -- and now a new British study has suggested that three glasses of bubbly a week can help improve memory.

Scientists are convinced that a regular tipple of champagne can help prevent brain disorders such as dementia and Alzheimer's disease, Daily Mail reported.

The study at Reading University, Berkshire, is the first time scientists have identified health benefits in champagne.

In Britain, one in three 'over 65s' develops dementia.

The compound that helps stave off forgetfulness has been found in the black grapes, Pinot noir and Pinot meunier, used for champagne.

In the words of lead researcher Jeremy Spencer: "These grapes are used in red wine and lots of research has been done on the health benefits of red wine, so I was curious to find out if there were any health attributes in champagne."

Red wine, if consumed in modest amount, has been found to help lower blood pressure and protect the heart. This is due to the compound chemicals in vines known as flavonoids.

Promoted
Listen to the latest songs, only on JioSaavn.com
The memory aid found in champagne, however, is a different compound, phenolic acid.

Spencer suggested that anyone over 40 would be wise to drink two or three glasses of bubbly a week.

Comments "Dementia probably starts in the 40s and goes on to the 80s. It is a gradual decline and so the earlier people take these beneficial compounds in champagne, the better," the research said.