Can Putting a Tax on Soft Drinks Curb Obesity? 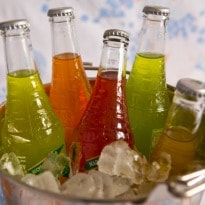 A 'soda tax' is a tax on sugar-sweetened beverages like soda and energy drinks. Sugary fizzy drinks have come up as of one of the major perpetrators of childhood obesity. A new study suggests that the most effective way to curb the consumption of these drinks is to levy a tax on them. This may discourage people from buying them. The fancy packaging, easy availability and lucrative advertising has brought about a significant increase in the consumption of soda drinks. But, the high levels of hidden fructose that these drinks contain has always been a reason to worry. (More: High fructose levels in beverages harmful)

Anurag Sharma from Monash University of Australia says, "Taxes on unhealthy foods are attractive because they not only generate tax revenue that can be used for public health care, but also promise health benefits for individuals."

Promoted
Listen to the latest songs, only on JioSaavn.com
He adds, "A more substantial tax would be needed to reduce consumption rates. While still imposing a relatively low tax burden, it could lead to weight reductions of up to 3.64 kg in middle-income heavy consumers of sweetened beverages."  (More: Soft drinks hinder weight loss)

The findings of the study showed that implication of taxes can be an effective weapon in the war against obesity. The soda tax is already applicable in some countries. The US taxes carbonated drinks at an average rate of 3.5 percent. The study further suggests that a 20 percent sales tax would raise annual costs per person by about $15 (Rs.903) to $17 (Rs.1024) which would cause the average consumption to drop by more than 2,388 calories a quarter.