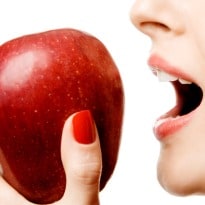 If you can bite into an apple, then you are more likely to maintain mental abilities and keep dementia at bay, according to a new research.

The older we become the more likely it is that we risk deterioration of our cognitive functions, such as memory, decision-making and problem solving.

Several studies have also demonstrated a link between not having teeth and loss of cognitive function and a higher risk of dementia.

One reason for this could be that few or no teeth makes chewing difficult, which leads to a reduction in the blood flow to the brain, the Journal of the American Geriatrics Society reported.

However, to date there has been no direct investigation into the significance of chewing ability in a national representative sample of elderly people, according to a Karolinska Institutet.

Now a team comprising odontology researchers and the Ageing Research Centre (ARC) at Karolinska Institutet and from Karlstad University have looked at tooth loss, chewing ability and cognitive function in a random nationwide sample of 557 people aged 77 or older.

They found that those who had difficulty chewing hard food such as apples had a significantly higher risk of developing cognitive impairments, independently of sex, age, education and mental health problems.

Comments Whether chewing ability was sustained with natural teeth or dentures also had no bearing on the effect.