Dementia not the Epidemic it was Feared to be, Say Academics 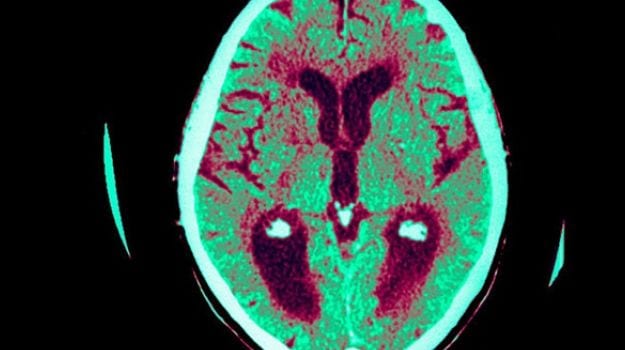 Brain scan: changes in life expectancy and improvements in health care and lifestyle made current dementia data out of date, said the report. Photograph: Alamy

Figures suggesting condition could become an epidemic are out of date, with numbers of patients stabilising across western Europe, say experts

Dementia may not be the fast-growing epidemic it has been painted to be, according to experts who say that numbers of sufferers are stabilising in some western European countries, including the UK.

The data usually cited for the proportion of people with dementia and the numbers of new cases being diagnosed are from the 1980s and now out of date, say experts from Cambridge University in the UK, Stockholm, Madrid, Bonn and Gothenburg. Yet these estimates are being used to plan care by the NHS and other health and social care bodies.

"These old studies support the idea of a continuing "dementia epidemic', but are now out of date because of changes in life expectancy, living conditions and improvements in health care and lifestyle," said lead author Carol Brayne, professor of public health medicine at the Cambridge Institute of Public Health.

In an analysis in the Lancet Neurology journal, Brayne and colleagues assessed the findings of five more recent large studies carried out in Sweden, the Netherlands, the UK and Spain that all compare the numbers of people with dementia and those being diagnosed over two different points in time.

Brayne said the apparent drop in numbers coincided with improvements in people's education and living standards, which are thought to protect against dementia, as well as a reduction in risk factors such as vascular diseases. Efforts to bring down cholesterol and blood pressure also help prevent dementia.

"Incidence and deaths from major cardiovascular diseases have decreased in high-income countries since the 1980s," she said. "We are now potentially seeing the results of improvements in prevention and treatment of key cardiovascular risk factors such as high blood pressure and cholesterol reflected in the risk of developing dementia."

Related: Government boosted in drive to cure dementia after 60% rise in volunteers

But that does not mean the end of dementia as a major issue for the NHS, said the authors, because of the growing number of elderly people. "It is important to remember that the number of people over age 85 is the fastest growing age demographic, with about 40% currently estimated to be affected by dementia," said her Cambridge co-author Yu-Tzu Wu.

Jeremy Hughes, chief executive of the Alzheimer's Society, said the problems caused by dementia in society were not going away: "While this study is welcome in showing that the percentage of people in particular age groups developing dementia could be getting smaller, the overall number of people with dementia is still set to increase as more people live into their 80s and 90s," he said.

"With no cure, few effective treatments and an economic impact exceeding that of cancer or heart disease, dementia remains the most critical health and social care challenge facing the UK."

Martin Prince, professor of epidemiological psychiatry at King's College London said he would have come to more guarded conclusions from the evidence in the studies because the numbers of elderly are growing so steadily. "A wise approach for policymakers, until we have much clearer evidence to the contrary, is to assume that age-specific prevalence remains constant, and that, therefore, numbers will continue to increase in line with population ageing," he said.

But the authors say their results suggest a "relatively optimistic" view of possible future trends. They say more effort should be put into research to find out how to prevent dementia by improving health across the lifecourse. At the moment, they point out, figures from the Alzheimer's Society show only 5% of research funding between 1990 and 2012 was spent on prevention, 11% on diagnosis, 20% on care and support and by far the most " 65% " on research on causes, cures and treatments.

A separate study in the Journal of Neurology, Neurosurgery & Psychiatry found that alcoholic drinks and coffee, as well as cholesterol-lowering statins and anti-inflammatory drugs like ibuprofen, helped prevent Alzheimer's disease, the most common form of dementia.

The researchers, from the University of California at San Francisco, identified nine potentially modifiable risk factors that, they said, were linked to up to two-thirds of cases of Alzheimer's worldwide.

The strongest evidence suggested a protective effect for the female hormone oestrogen, cholesterol-lowering drugs (statins), drugs to lower high blood pressure, and anti-inflammatory drugs (NSAIDs). They found the same level of evidence for folate, vitamins C and E, and coffee, all of which were associated with helping to stave off the disease.

The data indicated a strong association between high levels of homocysteine " an amino acid manufactured in the body " and depression and a significantly heightened risk of developing Alzheimer's disease.