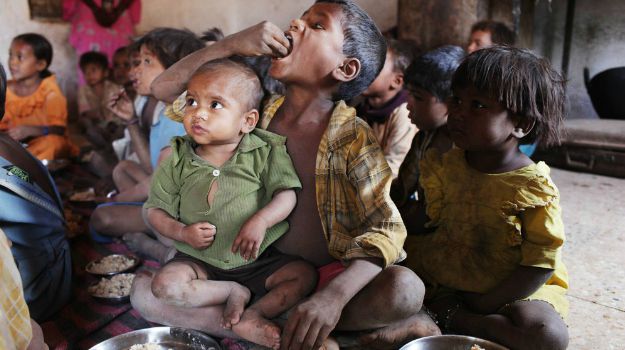 The central government has taken note of the United Nations annual hunger report, and accorded high priority to the issue of hunger, a union minister said on Wednesday.

"The government has taken note of the UN annual hunger report. As per the report, India has 194.6 million undernourished people but the number has declined from 210.1 million in the base year 1990-92," said Ram Vilas Paswan, Minister of Consumer Affairs, Food and Public Distribution, in response to a question in the Lok Sabha.

"The government of India has accorded high priority to the issue of hunger and malnutrition in the country and is implementing several schemes to improve food security in the country," the minister said. According to the report 'The State of Food Insecurity in the World' by the United Nations Food and Agriculture Organisation', there has been a 7.4 percent progress in the country to achieve the World Food Summit target, Paswan added. "The government is implementing the National Food Security Act, 2013, to provide food security to our population. So far, 12 states/union territories have implemented the act," he said.

(Number of Hungry People in India Drops by 6.5 Per Cent: UN Body)

The act provides for coverage of up to 75 per cent of the rural and 50 per cent of the urban population to receive highly subsidised food grain under Targeted Public Distribution System. Despite India's commitment to the Millenium Development Goals (MDG), the country has the maximum number of undernourished people in the world, according to the report.

MDGs are the eight international development goals established by the UN in 2000 to eradicate hunger and poverty and to reduce child mortality. Even at the World Summit on Food Security at Rome in 2009, world leaders pledged to work towards eradicating hunger.