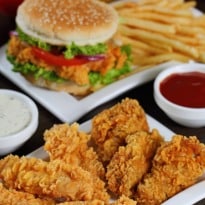 A diet rich in calories and carbohydrates may slow progression of the lethal, degenerative Lou Gehrig's disease, according to a small-scale study reported in The Lancet on Friday.

The new study follows up on suspicions that ALS patients may be placed at even greater risk if they lose weight. They find it hard to eat and swallow, and eventually have to be fed with a tube directly into the stomach. Experiments on mice genetically engineered to display ALS symptoms have found that those given a high-calorie diet rich in fat survived longer.

Building on this work, researchers in the United States tested 20 volunteers with advanced ALS who were at the stage of being tube-fed. The patients were divided into three groups. One was a "control" group which received a nutritional formula designed to keep their weight stable, while the other two received 125 percent of the calories they needed to maintain their weight.

They experienced fewer "adverse events" -- health problems ranging from pneumonia to muscular pains or rashes. They also gained more weight, picking up 390 grammes (0.8 pounds) per month on average, compared to a gain of 110g (0.24 pounds) in the control group and a loss of 460g (1.01 pounds) in the high-calorie high-fat diet group.

During the five-month followup, no deaths occurred among the high-calorie, high-carbohydrate group, compared with one in the high-fat group and three in the control group, said the study. The experiment was only conducted on a small scale and its chief goal had been to see whether ALS patients could safely change diet, rather than testing how effective the switch might be.

Listen to the latest songs, only on JioSaavn.com
"This pilot study demonstrates the safety of a novel, simple, low-cost treatment for a devastating disease where currently very few treatment options are available," said lead researcher Anne-Marie Wills at the Massachusetts General Hospital in Boston. "The adverse outcomes that we feared might result from weight gain, such as diabetes or heart disease, were not observed in our study period."

The team called for larger trials among patients at an earlier stage of ALS, to see whether these optimistic but cautious findings hold true.