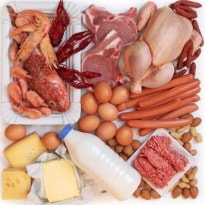 A high-protein, low-carb  diet has been doing the rounds for quite some time now. A new research holds that not only can a high protein diet help you lose weight but it can also regulate your blood pressure. According to a study published in the American Journal of Clinical Nutrition, adding more protein in the diet and cutting back on sugar resulted in a 5 point drop in the systolic blood pressure levels in overweight adults. Researchers at the University of Boston undertook an extensive study to analyse the link between a high protein diet and the fall in blood pressure levels.

"Protein intake may play a role in the long-term prevention of high blood pressure," said Lynn Moore, an associate professor of medicine at BUSM.

Promoted
Listen to the latest songs, only on JioSaavn.com
Experts analyzed the participants, taking into consideration the amount of protein they consumed through an 11-year period. It was found that adults who consumed more protein, whether from animal or plant sources, had significantly lower systolic blood pressure and diastolic blood pressure levels after four years of follow-up. Those who were consuming highest amount of protein (an average of 100 gram protein/day) had a 40 percent lower risk of having high blood pressure compared to the lowest intake level. The study was published in the American Journal of Hypertension and concluded that a high protein diet when coupled with increased fibre intake can cut down the risk of high blood pressure by 40-60 percent.