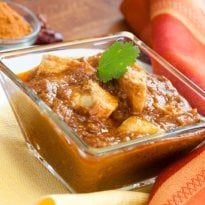 An Indian-origin chef and TV presenter has created a "lamb masala" curry that he says will help people sleep, because it produces effects similar to sleeping pills.

The spicy dish created by Gurpareet Bains contains an oil that is said to produce "intoxicating" effects, the Daily Express reported.

The insomnia-fighting recipe contains nutmeg, a spice which contains a psychoactive substance.

He says the lamb masala curry was created to help people combat the woes of sleep deprivation.

Promoted
Listen to the latest songs, only on JioSaavn.com
"Its ingredients have been used for millennia for their tranquilizing properties," Bains was quoted as saying.

Experts, however, recommend eating no more than half a nutmeg in any 24-hour period.

Comments The Indian chef also said he recommends that no more than one portion of his curry should be eaten per day.