More Than Half of Delhi Battles With High Cholesterol Levels 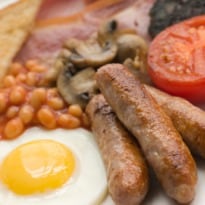 High levels of lipoprotein (LDL) puts one at greater risk for a heart attack, which could be triggered by a sudden blood clot in an artery narrowed by atherosclerosis (a clogging or hardening of the arteries).

From those screened for cholesterol levels as part of the survey, many were young and showed  first signs of the onset of a heart ailment - hypercholesterolemia and hypertension. The study findings show that this unhealthy trend is a direct result of a number of factors. Namely, over-eating, increased intake of junk food and a sedentary lifestyle. (More: How to manage your cholesterol)

Listen to the latest songs, only on JioSaavn.com
Metropolis Healthcare is a multinational chain of diagnostic centers with over 700 collection centers across India, Sri Lanka, South Africa and Middle East.