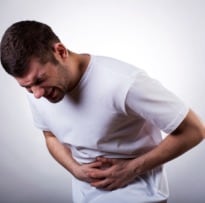 Irritable Bowel Syndrome or IBS is an extremely common gastrointestinal (GI) disorder that can be characterized by bloating, pain and discomfort, diarrhea, constipation and intermittent abdominal pain. The symptoms are caused by changes in how the GI tract functions yet there is no particular medical test to diagnose IBS. The GI tract includes the mouth, esophagus, stomach, small intestine and large intestine.

The exact cause of IBS condition is still unknown and researchers believe it could be a combination of physical and psychological problems. There is also no permanent cure to this problem and doctors usually prescribe a combination of various treatments like dietary changes, addition of pro-biotic foods and antibiotics to help ease the discomfort.

If you're suffering with this nagging irritable bowel syndrome (IBS) and cannot seem to enjoy your food this might interest you. Researchers have established a link between an immune system cell, macrophage (found in the muscular lining of the intestine) and the nerve cells. Macrophage regulates the contractions of the colon and pushes digested food through the digestive tract.  The interactions between macrophage and nerve cells are orchestrated by good bacteria that is found in the intestine that aids in healthy digestion.

A potential cause of IBS is a change in the bacterial environment in the intestine. Milena Bogunovic, assistant professor of microbiology at Penn State College of Medicine said,"By better understanding how the nervous system cells, the muscularis macrophages and signals from inside the intestine interact, we may be able to find new treatments for IBS or even prevent it."To dig further, researchers developed a method to deplete muscularis macrophages in the intestines of mice to determine their function. Bogunovic  went on to explain, "After macrophage depletion, we observed that the normal intestinal movements went irregular, suggesting that intestinal movements are regulated by macrophages,"

The next step was to figure out how this regulation works. Researchers found that thanks to the good bacteria, nerve cells and macrophages help each other carry out one key function which is to regulate the physiology of the gut. To test this theory they injected the mice with antibiotics to kill good bacteria and found that the communication between macrophages and neurons was interrupted.

Bogunovic concluded by saying that "On restoring the good bacteria in the mice, the miscommunication between macrophages and neurons was reversed. It shows that the dialogue between the macrophages and nervous system is adaptable to the changes in the bacterial environment."