New York City Bans Tobacco Sales to Anyone Under 21 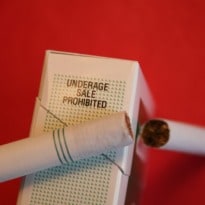 NYC bans tobacco sales to anyone under 21

New York City's mayor signed legislation Tuesday banning the sale of tobacco products to anyone under 21, making New York the first large city or state in the U.S. to prohibit sales to young adults.

Outgoing Mayor Michael Bloomberg, a former smoker, has had a special focus on health measures during his 12 years in office.

Bloomberg said raising the legal purchase age from 18 to 21 will help prevent young people from experimenting with tobacco at the age when they are most likely to become addicted. City health officials say 80 percent of smokers start before age 21.

The mayor also signed legislation setting a minimum price for all cigarettes sold in the city: $10.50 per pack. The city already has the nation's highest cigarette taxes.

Bloomberg rejected criticism from some retailers that the measures would hurt the economy and lead to job losses.

"This is an issue of whether we are going to kill people," Bloomberg said.

Teenagers can still possess tobacco legally. Kids will still be able to steal cigarettes from their parents, take them from friends or buy them from the black-market dealers who are common in many neighborhoods.

Tobacco companies and some retailers had said the age increase would simply drive teenagers to the black market.

"What are you really accomplishing? It's not like they are going to quit smoking. Why? Because there are so many other places they can buy cigarettes," said Jim Calvin, president of the New York Association of Convenience Stores.

Calvin also pointed out the illicit supplies brought into the city by dealers who buy them at greatly reduced prices in other states, where tobacco taxes are low.

Young smokers ridiculed the law as an infringement on personal freedoms and questioned whether it would lead to reduced smoking rates.

"It's obviously going to make life more complicated," said fellow New York University student Josh Kundert-Gibbs, also 19. "We are going to have to buy in bulk."

Comments Both said, though, they regretted having started smoking in the first place.