Pregnancy Food: What You Eat Can Affect Your Child For Life 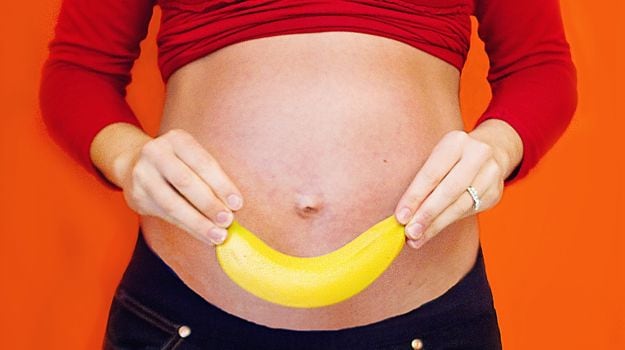 An in-utero diet high in fat or sugar can lead to the child growing up obese. Photograph: Getty Images/Flickr Open.

You might think it's a time to put your feet up and inhale a tub of ice-cream, but eating healthily during those all-important nine months can stop your child becoming obese, and avoid mental-health and social issues.

"Listen to your body," is one of the most overused phrases in the pregnancy-vadvice market. And, actually, it's really hard to ignore your body when you're pregnant; it mutinies and starts ordering you about. In many ways this is good - forcing you to go to bed early, or eat enough protein. But, in the unnatural food landscape of today, in which irresistible unhealthy snacks are the easiest foods to come by, it can also be bad.

The first time I was pregnant, I signed up for a daily email with tips and information on the baby's development. Occasionally, I'd receive a gentle reminder to snack on carrot sticks instead of cakes, and I would think: "Up yours, patronising email service - don't you realise you're talking to someone who makes her own sodding muesli?" Then I'd inhale an entire carton of ice-cream, which obviously needed replacing every 48 hours, as was surely the right of all weary pregnant women everywhere.

But, as obesity researcher Nicole Avena sets out in her new book, What to Eat When You're Pregnant, avoiding overindulgence and eating healthily is even more important when pregnant. Firstly, she says, the average woman (in the US) who becomes pregnant is already overweight or obese, which heightens the risk of conditions like pre-eclampsia, gestational diabetes and postpartum haemorrhage. And between 46% and 59% (depending on BMI) of these women will gain more weight than necessary when pregnant, which will likely be retained post-pregnancy.

Secondly, it's widely accepted now that what happens in the womb does not stay in the womb. Research that Avena and colleagues have done (albeit mostly in rats) has found that not only can an in-utero diet high in fat or sugar lead to the child growing up obese, but maternal diet, she writes, "can have a long-lasting impact on the offspring's risk of developing mental-health disorders, impaired social behaviours, lower cognitive abilities and increased response to stress".

That's a bitter pill to swallow, especially in a society that sometimes seems designed to make people fat. And, as more and more individual studies on the impact of maternal behaviour are reported, it can feel as though the media is building a case against mothers. "That's a valid debate," says a very pregnant Avena, via video link. "Part of the reason I wanted to do the book was because women are given guidelines about what not to eat during pregnancy. There's a lot of weight-shaming that goes on when it comes to pregnancy, although we have to address it because it's important. But it doesn't have to be negative. I try to focus on the healthy aspects of eating while pregnant."

So, after walking readers through the cold, hard science of pregnancy weight-gain and the risks associated with eating badly, the fun part begins: a week-by-week guide to what to eat, and what your baby is growing right now (brainstem, skin, fingernails), along with easy recipe suggestions. Week 34, for instance, is all about squash, which is high in fibre - an essential in beating third-trimester constipation. A nice prompt, but then fibre is always necessary. Isn't a common-sense, healthy, balanced diet all that's ever required? "The book is not necessarily meant to make women eat brussels sprouts during a certain week," says Avena, "but, if they can focus on them in one week and try to incorporate them into their diet, I'm giving them a way to eat healthily in a prescriptive manner - not just telling them: 'OK, eat healthily.'" Which, judging by obesity levels, isn't enough.

In the throes of early pregnancy, however, all this is the last thing many women want to deal with. Traditionally, it's a time to put your feet up and enjoy your extra calorie allowance. The hospital in New York where Avena works runs weight-loss clinics and, when female attendees become pregnant, many of them want to drop out. "We encourage them to stay in," says Avena. Not because they think they should lose weight while pregnant, but because "you still can benefit from some of the advice on how to maintain healthy eating and dietary patterns".

Could, I wonder, any ill-effects that my chocolate Hagen-Dazs habit had on my daughter, in the womb, be erased by her upbringing? It's hard to accurately study nature versus nurture in humans, but Avena has placed baby rats, born to mothers fed on high-sugar and high-fat diets, with rats on healthy diets - to breastfeed and raise them. "They still grew up to have these changes in the brain, and have propensities to want to consume high-sugar and high-fat foods," she says. However, in humans, if self-restraint is taught and the child is brought up to recognise their satiety signals, "then that's going to mitigate the effects that might have occurred from in-utero exposure".

Avena demystifies cravings by talking about the hormones involved and suggesting how to beat such mutinous urges. Taking a mindful approach has been shown to help addicted people move past their cravings; rather than trying to fight it or giving in, simply acknowledge and accept it. Planning ahead pays - make healthy foods more readily available than the contents of the nearest vending machine. Tipping off friends and family to resist feeding you treats helps, too, as does sufficient sleep. And, finally, know your cravings. Typically, Avena writes, genuine hunger-driven cravings are for food groups (like meat), rather than specific food items (like ice-cream). In other words, listen to your body, but only when you know its intentions are sound.