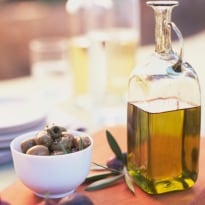 Indian households should completely switch to olive oil as a cooking medium as its nutritional value is very high, it is rich in monounsaturated 'good' fats and, when used daily, can bring instant and easy wellness to a family's diet, celebrity chef and noted cookery expert Nita Mehta says.

"Even though we have such a wide range of olive oils in our market, people don't seem to use them because of their mental block that the flavor of olive oil doesn't gel with Indian flavors," Mehta said at the launch here Saturday her latest book, "Indian Cooking With Olive Oil".

"This is, in fact, a misconception because there is a grade known as olive pomace oil which is neutral in taste and so does not affect the spices and flavoring that Indian cooking is all about," she added.

"Moreover, olive pomace oil is resistant to heat for long periods of time, so this is the grade to use when we need to cook masalas for long as the other olive grades do not have a very high smoking point and so 'break' and ruin the taste of food. Olive pomace oil gels well with tandoori dishes as well as curries. Paranthas and biryanis cooked in olive oil are mouth watering. Even frying in olive pomace oil gives crisp, non-oily food," Mehta noted.

The book was jointly released by V.N. Dalmia, chairman of Dalmia Continental, which owns Leonardo Olive Oil, the No.1 brand of olive oil in India in the edible segment and Ugo Astuto, the Italian embassy's deputy chief of mission.

Published by SNAB Publishers, the cookbook features many exciting recipes, from innovative Broccoli Peanut Kebabs to traditional Bhagaare Baingan, from healthy Zucchini Oat Crunches to the decadent Gulab Jamun, all made healthier with olive oil.

"Most recipes in this book use pomace but since contemporary Indian cooking has so many varied flavors and aromas, we can also use the intermediate grade of olive oil, called "pure olive oil", for light sauteing. This gives a different dimension to the food," Mehta said.

Olive oil is universally acknowledged as the healthiest cooking medium and, increasingly, Indian kitchens too are switching over completely to this medium.

"It's high time this happened, since lifestyle disease in India is fast becoming a national emergency. India ranks No.1 in the world for number of cardiac patients. Thirty-one percent of urban Indians are either overweight or obese. One hundred million people in India have high blood pressure. Over 40 percent of urban Indians have high lipid levels. India is the diabetic capital of the world," Dalmia noted.

"The greatest benefit of olive oil is that it fights coronary heart disease. Olive oil has the highest content of monounsaturated "good" fats (no less than 80 percent) amongst all edible oils, which reduce bad cholesterol (LDL) and triglycerides.

"At only 10 percent, it has amongst the lowest percentage of saturated 'bad' fats, which increase bad cholesterol. High MUFA content in olive oil has been found to prevent high cholesterol, fight heart disease, and help in the prevention of diabetes as well as cancer," he added.

Promoted
Listen to the latest songs, only on JioSaavn.com
Mehta has published over 400 cookbooks and sold over 6 million copies, making her one of the largest selling cookbook authors in Asia. Her books have been bestsellers in countries all over the world and she has won several international awards, including the Best Asian Cookbook Award at the World Cookbook Fair in Paris in 1999 for her book Flavours of Indian Cooking.

Her chain of cooking institutes has now been running successfully for over 25 years and she will soon be unveiling a chain of restaurants under her banner.

Comments Launched in 2003, Leonardo Olive Oil pioneered the use of olive oil for Indian cooking.