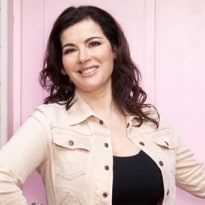 Those whose lips curl at the thought of a ready meal, who stride through the supermarket only in search of the freshest ingredients for the Jamie Oliver recipe they intend to follow that evening, may well be aghast at the latest revelation from the British Medical Journal. When it comes to saturated fat, fibre and calories, TV chefs are doing us no favours. The healthier option is the one you heat up in the microwave.

Nobody, say the public health experts at Newcastle University who have written the paper, has thought to examine the nutritional implications of the recipes we are offered in some of the bestselling cookbooks in the country. Most people take it for granted that home-cooked food is better for us than something that comes ready-prepared in a carton.

But Martin White, professor of public health at Newcastle University, and colleagues say it is not so. They took a close look at 100 recipes in some of the nation's favourite cookery books - 30 Minute Meals and Ministry of Food by Jamie Oliver, Kitchen by Nigella Lawson, River Cottage Everyday by Hugh Fearnley-Whittingstall and Baking Made Easy by Lorraine Pascale. They compared the nutritional value with those of 100 randomly selected brand name ready meals from Asda, Sainsbury's and Tesco.

Neither, they said, met national or international guidelines for a balanced diet. But, they added: "The recipes seemed to be less healthy than the ready meals on several metrics." Per portion they contained significantly more energy, protein, fat and saturated fat and significantly less fibre than the ready meals. They would be more likely to attract red "traffic light" warning symbols under Food Standards Agency criteria.

By 2020, it is estimated that 70% of adults in the UK and the US will be overweight, causing soaring levels of diabetes, heart disease and cancer. White and colleagues think the traffic light warning scheme should now be applied to recipes from TV chefs, who could also put nutritional values on screen, on websites and in cookery books. A 9pm watershed has been advocated for advertising of unhealthy food, and the authors point out that nobody has yet suggested something similar for TV chefs.

Oliver's 30 Minute Meals recipe for meatball sandwich, pickled cabbage and chopped salad, for four people, is just under 1,000 calories per serving. His mini shell pasta with a creamy smoked bacon and pea sauce from Ministry of Food has 125g of fat and 63g of saturated fat. Lawson's beer braised pork knuckles with caraway, garlic, apples and potatoes has 1,340 calories per person and 102g of saturated fat. Fearnley-Whittingstall's Gill's poached leek and Dorset Blue Vinny tart contains 217g of saturated fat while his mixed mushroom tart (for two) has just 3.2g of fibre. Pascale's pork with calvados, caramelised apples and mustard mash has 1,161 calories per serving and a total of 147g of sugar.

The most calorific of the supermarket ready meals, on the other hand, was Tesco's chicken tikka masala and pilau rice, at 870 calories, and the highest score for saturated fat was its cauliflower cheese at 21.3g.

"We did not set out to bash the chefs," said White. "That wasn't at all our intention. If you look at the TV chefs as a whole, there are a number of them who are vociferous champions for sustainable food and healthy eating. They are a passionate lot who do care about the healthy content of our diet." He hoped they would respond to the paper by looking again at the nutritional value of their recipes and the need for better information.

He thinks the ready meal manufacturers may have reformulated their products in response to criticism. "They were heavily criticised for salt content a few years ago. The advent of better nutritional labelling and things like traffic lights has drawn attention to the content of ready-prepared food." Only 4% of the ready meals they examined, however, were inside the World Health Organisation limit on salt.

Oliver's representatives said they were already on the case. "We welcome any research which raises debate on these issues and in fact Jamie's most recent book, 15 Minute Meals, does contain calorie content and nutritional information per serving for every dish. 15 Minute Meals is a landmark book for Jamie because we intend to have clear signposting on every book going forward.

"We will soon also be re-launching the Jamie Oliver website with nutritional information on the recipes. However, we would regard the key issue to be food education so that people are aware of which foods are for every day and which are treats to be enjoyed occasionally."

A spokeswoman for Pascale said: "Some of the recipes in Lorraine's book are healthy, some not quite so much so. There are plenty of salads, soups and light meals as well as the richer dishes.

"Her books and shows to date haven't been about healthy eating, they are about cooking. However, funnily enough, the topic of her next series and book specifically addresses healthy eating."

Lawson's agent said she was not available to comment and there was no response from Fearnley-Whittingstall.