Why Balance Can Make or Break a Runner 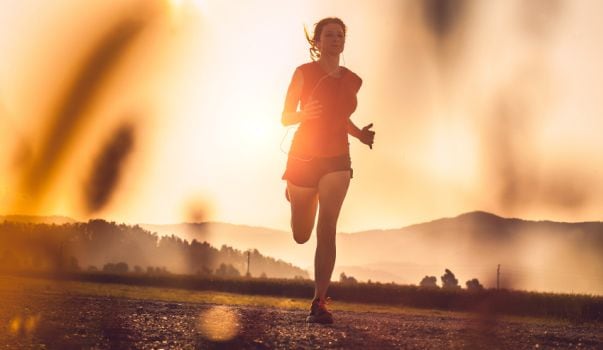 Especially in the spring, it can feel as if it's a balancing act to train for upcoming races. You're increasing your weekly mileage at the same time you're preparing healthy meals for your family and juggling deadlines at work.

Yet for runners, the idea of balance could not be more critical, because running is, after all, an actual balancing act.

"When you run, you never have both feet on the ground at the same time," said Ian Hankins, head men's cross-country and track and field coach at the Catholic University of America. "Everything needs to line up at the center of your body so you don't fall over. When your core and posterior chain are aligned and you're not tipping forward or leaning back, as a runner, you are more efficient and use less energy."

Hankins, who joined the Cardinals in January, is a three-time NCAA regional qualifier in cross country. He's also a sport performance consultant for H2K Sports, where he designs and implements training plans for distance runners and critiques running technique through video analysis.

In addition to coaching his athletes through such running warm-ups as A-skips and carioca, or grapevine - drills that teach the body how to run in the correct way - Hankins incorporates Olympic lifts to strengthen core muscles.

"Most distance runners don't think about the importance of weight training to strengthen the core and upper body for the purpose of running more efficiently," Hankins said. "You need to have strong upper-body muscles to balance and hold the body in the proper position over a long period of time and during high intensity."

Runners who have an impaired sense of balance are at an increased risk of injury by tripping and falling, said physical therapist Kevin McGuinness, who practices at Washington Orthopaedics & Sports Medicine. Imbalances also cause overuse injuries when certain muscles are forced to overcompensate for others.

Since 47 percent of the 541,000 finishers who competed in 1,100 marathons in the United States in 2013 were 40 or older, according to Running USA's 2014 Annual Marathon Report, even if you're not competing as a collegiate athlete, you need to incorporate balance into your training, McGuinness said.

He noted that we derive our sense of balance from information collected by the muscular skeletal system, the visual system and the vestibular system inside the inner ear. All these tell the body where it is in space and how fast our limbs are moving.

Oftentimes, motor control coordination gets lost in the mix, McGuinness said. Runners have been known to focus on nutrition, mileage and strength, which are all important, but at the expense of balance training.

So how do we know if we're off balance when we run?

"One of the biggest parts of being an elite is trying to figure out all the little things you can control to make yourself the best you can be," Muir said.

Muir had just done two marathons, and both had gone very badly, she said. "I really struggled around the usual spots where people struggle - or maybe even earlier - around 19 miles, and I just blew up, basically," she said.

"Looking at photos of myself, I could tell I was wasting energy," Muir said. "My upper body was moving side to side instead of forward, so most of my energy was pushing sideways instead of ahead."

Muir underwent a skeletal analysis of her gait at the University of Virginia SPEED Clinic, and it took six months of balance drills to retrain her body to run more efficiently and injury free. For Muir, that meant spending a few hours each week in the gym with her strength coach, Drew Watts, to correct the imbalances that she had developed running with poor mechanics over the previous 10 years.

A year later, Muir returned to the clinic for a follow-up analysis, and her gait had vastly improved. She said she has not suffered any running injuries since then.

Numerous factors can cause runners to be off balance, McGuinness said. Yet, as in Muir's experience, he said, deficits in any of the systems involved in running - poor motor patterns, inner ear or visual problems, or even core strength weakness - can be addressed by training.

Age, too, can be a factor affecting sense of balance, McGuinness said. Age-related changes to the visual and the vestibular system, in addition to muscle weakness and stiffness as we get older, can affect the brain's ability to make these kinds of adjustments as we run or, in some instances, walk, he said.

Inner-ear problems are common, he said, and side effects from medications as well as a decrease in brain tissue in the cerebellum, the part of the brain that helps coordinate movement, can affect a runner's sense of balance.

"The good news is you can train the balance system by incorporating exercises that physically coordinate what the limbs are doing."

All three of these exercises challenge your sense of balance in slightly different ways. Every drill combines muscular, skeletal, visual and vestibular input.

Single-leg stance: Stand on one leg in front of a mirror and place your hands on your hips. Keep your standing knee slightly bent and your hips level. Swaying a little is normal. Standing on a pillow or other soft surface makes this more difficult. See if you can hold this position for 30 seconds.

Tandem stance: Place one foot behind the other as if you were standing on a tight rope. Start with the back foot directly behind the front and increase the distance to make it more difficult. See if you can hold this position for 60 seconds.

Farmer's walk: Hold a moderately heavy weight in one hand and walk a pre-measured distance (try 50 feet to start). Maintain an upright posture and alternate arms after 50 feet.