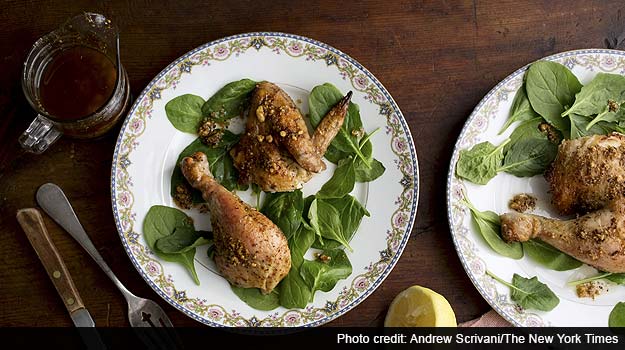 Brining a chicken before roasting it is an age-old technique. An overnight soak in brine seasons the bird through and through, and locks in moisture for tender flesh. But unless you happen to work at a Greek restaurant, crumbling your way through 600 pounds of feta cheese a month, you may not think to use feta brine instead of plain salt water. At Souvla in San Francisco, they did, and so they do.

Feta brine is the liquid in which feta is packed, a saltwater solution that preserves the cheese during storage. Charles Bililies, Souvla's owner, and Tony Cervone, its chef, were tired of watching that brine being thrown down the drain. It's more complex than salt water, with a slightly fermented, pickled flavor and an umami character that they knew could be harnessed for another purpose.

Cervone had the smart idea to use it as a brine for rotisserie chickens, which they serve at the restaurant and sell as takeout. Not only has it helped the birds roast up plump and juicy, but it also adds a pleasing earthiness to the flesh. Customers noticed; the burnished birds invariably sell out after they go on sale every night at 6.

Making feta-brined chicken at home is a snap, even if you don't have commercial feta brine (though if you do, go ahead and use it). In its place, Cervone and Bililies recommend puréeing feta in water, then letting your chicken marinate in the mix overnight in the fridge. The next day, pat the bird dry, cover it in plenty of grated lemon zest, dried oregano and lots of freshly ground black pepper, and roast it as you would any chicken.

So I made it, serving the dish to my friend Sonia, who is the best Greek home cook I know.

"Needs more feta," she said. "You can't really taste it."

This was true. The chicken was terrifically fragrant, but not really feta imbued. While this may be the point at Souvla, in my kitchen I wanted a little more punch. Sonia suggested I add more feta to the brine. Then, just to drive the point home, I also crumbled feta directly into the pan juices as the chicken rested, creating a pungent sauce. A squeeze of fresh lemon juice brought the flavors together.

Although it may not be like anything you would find in Greece, it's a Greek-American creation that tastes good right here.

Time: 1 1/2 hours, plus at least 9 hours' marinating and resting

1 large bunch arugula or other sturdy salad greens, for serving

1. The day before serving, combine 2 ounces feta, 2 teaspoons salt and 4 cups water in a blender and blend until smooth. Put chicken in an extra-large resealable plastic bag or a container large enough to submerge chicken, and cover with the feta brine. Refrigerate at least 8 hours or overnight.

2. Before cooking, remove chicken from brine and transfer to a towel-lined tray. (Discard brine.) Pat chicken dry with paper towels and allow to come to room temperature for 1 hour.

3. In a small mixing bowl, combine remaining 1 1/2 teaspoons salt, the pepper, the oregano and the zest of the lemons (about 1 tablespoon). Liberally cover chicken in herb mix and gently massage entire bird. Halve lemons and place 3 halves in cavity (save remaining half for serving). Using kitchen twine, tie legs together.

4. Heat oven to 450 degrees. Place a large ovenproof skillet over high heat. Add oil and heat until it just smokes. Place chicken, breast-side up, in pan. Transfer entire pan to oven. Cook, basting once or twice, until juices run clear when chicken is pierced with a knife, 50 to 60 minutes.

5. Remove pan from oven, then add remaining crumbled feta into juices in pan and stir well. Let chicken rest for 10 minutes in the pan before slicing and serving on a bed of greens, with feta-laced pan juices on top.

Drizzle with a little lemon juice from the reserved lemon half.

A properly roasted chicken can be the best possible partner to all sorts of wines, red, white, sparkling or fortified. In this dish, the citrus, lactic and pepper accents that come with the brining and spicing suggest a white would be best. Beyond that, orient yourself in almost any direction you like. A good Greek white echoing the feta is a possibility, particularly a richer barrel-aged assyrtiko from Santorini. Or maybe Italian whites, like a falanghina from Campania or an Etna Bianco from Sicily, which often have saline flavors that will show off the spicing nicely. Chardonnay from Burgundy or the United States will be great, whether rich or lean, provided it's not oaky or sweet. And if you simply must have a red, consider a savory syrah from the northern Rhone.

How To Whip Up Mango Tostada For A Quick Evening Snack (Recipe Video Inside)
Covid-19: 5 Tips To Keep Fruits And Vegetables Clean According To FSSAI