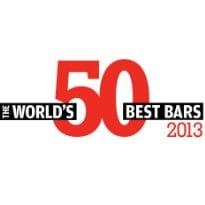 If you've read the title of this article, you may have an idea about my new mission in life. I have 50 places to visit and strike out on a list one by one - no guesses here, it's The World's 50 Best Bars list, created by an Academy which consists of a group of people that are among the most influential and knowledgeable in the bar industry.

Academy members include industry legends, world-class bartenders, champion brand and category ambassadors, as well as bar owners and bartenders from our previous top 50 lists. This year, almost 230 voters from around the world were welcomed.

How does the voting work?

This is what the Academy asks of those who vote - "please nominate the five best bars in the world in your professional opinion. At least two of your votes must be international; the remaining three can be either from your own country or further international votes. Please list the bars in order of your preference, in case of a tie."

The only criteria are:
- You must not currently work in/won the bars you vote for
- You should have visited the bars in the past two years
- The bars must still be open

The World's 50 Best Bars - 20131. Artesian at the Langham Hotel, London
This is no ordinary 5-star hotel bar. If you want the trappings of tradition, you can have them because the chaps behind the stick know their classics. But if you want something a little, well, out of the ordinary, you've come to the right place.

2. Nightjar, London
Bar co-owner Edmund Weil describes Nightjar as 'old school glamour, surprising cocktails, live music, top service and a very special atmosphere in a space which is never overcrowded'. From the outside, you¹d walk right by if you didn't know any better. But once you have descended into this jazzy basement, you will find your time, your money and your heart all being taken by the 20s vibe and the amazing cocktails.

3. High Five, Tokyo
This tiny Tokyo hangout is gaining votes faster than a rising X Factor star and it's thanks to the main man, Hidetsugu Ueno, a big figure on the global bar scene.

4. Connaught Bar, London
The Connaught is famous for its Martini trolley and you can watch your drink materialise at the white-gloved hand of a pro.

5. The Dead Rabbit Grocery & Grog, New York
"We wanted to create a cocktail bar of the 21st century something that would not be here today and gone tomorrow. We wanted something with longevity."

6. Happiness Forgets, London
"The bar is approachable to everyone. In my eyes this means simple, classic-style drinks on a short, uncomplicated menu that can be delivered quickly and consistently."

7. Black Pearl, Melbourne
Think low lighting, low tables and high-end drinks. You can have aserious drink, without being serious.

8. Baxter Inn, Sydney
Take a seat at the long bar and munch on the bottomless bowl of pretzels while you ogle the rows of whisky bottles.

10. 28 Hong Kong Street, Singapore
The bar even boasts it's own herb garden on the roof and fresh ingredients play a big part in what makes the cocktails tick.

11. Callooh Callay, London
"You never want to be stagnant or boring. That can mean taking risks, but 99% of the time it pays off."

12. Employees Only, New York
Once you're in, chances are you're staying until chicken soup at 3:30am.

13. PDT, New York
As you go through the phone booth from the hotdog joint, think about ordering a Benton's Old Fashioned.

14. Dry Martini, Barcelona
Don't expect to leave Dry Martini early or particularly sober because this is a drinking and dining experience to be savoured.

15. Door 74, Amsterdam
"We create a unique drink of the day, every day, which is actually our biggest selling drink. This shows that our guests are confident in our skills."

16. Le Lion BAR de Paris, Hamburg
"You are entering our extended living room where someone has put a bar. And a big lion. Hopefully you are not afraid of lions."

17. Buck & Breck, Berlin
Buck & Breck opened its doors one chilly morning in December 2010. Gonçalo de Sousa Monteiro is behind the stick and, in his own words, is "owner, manager, bartender, barback and doorman".

18. The Parlour, Frankfurt
"We serve all kinds of drinks but our focus lies in our own creations, which are all extraordinary in presentation."

19. The Jerry Thomas Project, Rome
The name Jerry Thomas is to bartenders a bit like the name Jesus to Christians. Although born nearly 200 years ago, his name is alive and kicking in today's industry. He famously penned How to Mix Drinks/The Bon Vivant's Companion in 1862 and it has been a bible for those interested in the history of their craft for many years.

21. Death & Co, New York
Serious libations pop out of a carefully created and beautifully designed menu, and the cocktails have always delivered.

22. Ruby, Copenhagen
Epic rooms and high ceilings in a classic 18th-century structure are a perfect canvas for the bar, and it has been dressed appropriately.

23. Schumann's, Munich
Simplicity is a cornerstone of design, the bar feels like a classic and is likely to endure as one.

24. The Everleigh, Melbourne
The Everleigh of 1900s Chicago was reputedly the most luxurious brothel in America and counted Prince Henry of Prussia among its patrons. Good times. No such shenanigans at the cocktail bar of the same name in Melbourne; indeed, the only similarity might be the fact that the space is intimate and romantic enough to act as an aphrodisiac.

25. Eau de Vie, Sydney
The sense of enjoyment is firmly in place, the service is generous and the interaction lively and amiable.

26. Bulletin Place, Sydney
Everything Tim Philips touches turns to gold. Everything we know about that is - there's no evidence he's turned women gold yet, but it wouldn't surprise us on the evidence of his drinks prowess.

27. 69 Colebrooke Row, London
As with everything Conigliaro does, it's about challenging our perceptions and his proof is invariably in his pudding. Or aperitif.

28. Chainaya. Tea & Cocktails, Moscow
It lies beneath a Chinese restaurant and smacks of the speakeasies that once gave refuge to NY's imbibing insurgents.

29. Mutis, Barcelona
If you can find it, Mutis delivers. In a converted apartment surrounded by occupied residencies, it is an unusual project.

31. Clover Club, New York
The bar top is an 1892 mahogany furnishing from Pennsylvania.

32. Bramble, Edinburgh
Bramble is among the few truly celebrated bars in this part of the world and has made it on the list from the start.

33. Le Forum, Paris
Bonjour La Classe as Paris continues to make its mark on the cocktail world. In among the new faces is this old chien, which dates way back to 1918. Le Forum was originally famed for its tea but started serving up stronger libations from the 1930s and since then has revelled in an American bar-cum-gentleman's club style.

35. Floreria Atlantico, Buenos Aires
Everything about the place has been carefully considered and nods to its environment and heritage, but around it are sparks of modern design and a healthy dose of contemporary thought in the drinks menu.

36. Lebensstern, Berlin
One the claims to fame must be the spirits selection. It snakes around the walls in cabinets and must be one of the most comprehensive in Berlin.

37. La Capilla, Tequila, Mexico
La Capilla is a universal favourite and integral to any visit to the region.

38. Quinary, Hong Kong
The style of the bar is hard but modern, industrial chic being the hackneyed term usually applied to such surroundings. But what makes the bar interesting is the attempt to bring complex cocktails to this part of the world.

39. Little Red Door, Paris
You don't actually enter through the red door, although you should try. It probably ends up in Narnia. Or a hotdog shop. The staff's original drinks education comes via the Experimental Cocktail Club, a bastion of beverage learning in Paris that provides the city with more students keen to launch their own concept. As a result, the staff know their classics from their contemporary creations.

40. Le Coq, Paris
The concept is about what goes in your mouth rather than your eyes and ears, so the 70s theme is not as important as the influences on the menu.

41. Shady Pines, Sydney
Opened by bartenders Anton Forte and Jason Scott, this bar takes the dive concept right back to the wild west. A zoo full of taxidermy and a wood-carved native American statue, the decor apparently came courtesy of an American-themed restaurant and has been put to good use.

42. Attaboy, New York
This bar wasn't open long before the votes for this top 50 closed and they've stormed into it, so they must be doing something right.

43. Sherry Butt, Paris
Anyone who writes or reads about drink will note that Sherry has been threatening to become the next big thing for the past decade. The service is spot on and manages to confidently walk the tightrope of quality cocktails without intimidating the novice who walks through the door.

44. Pouring Ribbons, New York
The bar has been celebrated for its open, bright and breezy environs, a complete contrast to the basements that have commanded most bar headlines in the city.

45. Tippling Club, Singapore
Tippling Club has been heralded as one of the most innovative food and drink experiences around. Drinks on the menu are divided according to dry, sweet, sour and spice on a flavour map without any boundaries, obviously.

46. Drink, Boston
What subsequently emerged and continues to earn plaudits is a modern bar with a serious commitment to serious cocktails complete with neighbourhood bar vibe.

47. Tommy's, San Fransisco
Tommy's is a Mexican restaurant at heart and a temple for tequila aficionados.

48. Baba Au Rum, Athens
Regardless of your knowledge or your enthusiasm for discerning drinking, this is a place where you can come and drink what you want, relax and chat to people, get a little inebriated - responsibly - have a laugh and go home satisfied you've had a night out in the company of a few interesting and pretty people.

49. Nottingham Forest, Milan
Owner Dario Comini is a respected bartender with years of experience, coming to the trade from a chemistry background. That would immediately imply something molecular in the mixing here, although on the surface Nottingham Forest lends itself more to a tiki haunt.

50. Delicatessen, Moscow
Menu emphasis here is on the bartender knowledge, with customers encouraged to ask questions, and the selection of drinks is eclectic, further enhanced by the offer of customer boxes, in which they can lock their own unusual creations.

Best Bar in the UK
Artesian at the Langham Hotel, London

The Academy points out, "We were asked once why there wasn¹t more criteria to define a 'best bar'. The answer is that it is really important to trust the professional opinion of those at the top of their game. It's not just about the service, the menu and the decor, it's about how that all fits together, in whatever guise, to become one of the best bars in the world. It's important a backstreet basement hangout has the same chance to be number one as a 5-star hotel bar."