Lee Kang Bin is a barista from South Korea who has created incredible art by using a cup of coffee as his canvas. Take a look at his creations! 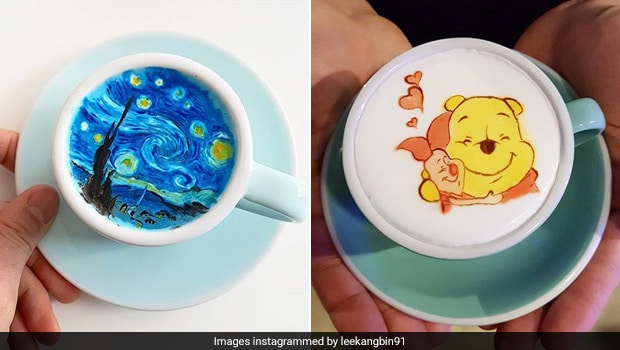 Coffee isn't just a beverage that wakes you up in the morning, it's a whole other feeling altogether. Caffeine-addicts swear by their one cup of joe for an incredible way to begin their day. Latte or espresso, cappuccino or mocha - whatever coffee you pick has something unique to offer. A barista in South Korea has taken the coffee experience a notch higher by creating amazing art on top of the froth in the coffee cup. Lee Kang Bin has an Instagram handle which showcases many of his wonderful creations. Take a look:

With a huge following of nearly 273k and counting on Instagram, Lee Kang Bin has created a definitive internet fan base for himself. Coffee is his canvas and edible paint and food colouring are his tools. His work delves into several kinds of popular references such as famous artworks, cartoon characters and movies. Lee Kang Bin has recreated many masterpieces on coffee such as Da Vinci's Mona Lisa, Edvard Munch's Scream and A Starry Night by Van Gogh. Apart from this, he also paints Disney characters such as Winnie the Pooh and Aladdin, as well as cartoon characters such as Snoopy by Charlie Brown.

The impressive artwork by Lee Kang Bin is intricately detailed and amazes you every time. While 'Latte Art' usually focusses on created designs with white cream on top of Cappuccino froth, his art takes it a notch higher by making entire paintings there. Kudos to the artist and we hope to see many more such beautiful creations by him!