Do You Know This Hack To Peel An Onion Without Hassle? Check Out Viral Video

Peeling onions, in particular, can be a tedious process often taking up more time than is necessary. This hack makes it much easier with a one-step process. 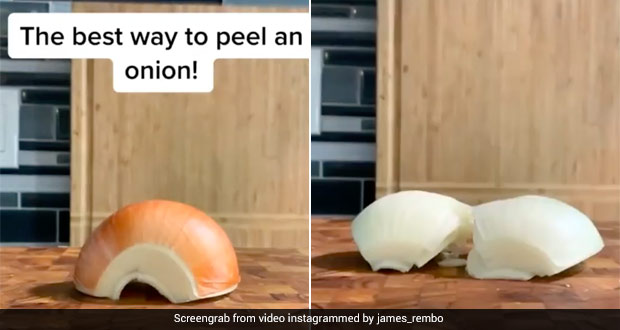 This hack lets you peel an onion within seconds.

Onion, garlic and ginger are some of the very staple ingredients of Indian cooking. They are used in nearly every dish, whether it is a crunchy appetiser or even a main course gravy. The flavours they lend to any dish are absolutely unparalleled to any other ingredient. But the issue comes when we have to peel, chop or dice them in order to add them in our dishes. Peeling onions, in particular, can be a tedious process often taking up more time than is necessary.

Well, guess what - a new video which has surfaced on social media makes the process of peeling onions so much easier. All you need to do is cut the onion into half, and then punch it in the middle in order to remove the peel. Take a look at the video which was shared on Instagram:

The video was shared by @james_rembo on Instagram, who is from Denver and often shares more such videos on his handle. "Apparently people enjoy how i can peel an onion," wrote the user while sharing the hack. What he did in the hack was basically to chop an onion into half and punch it in the middle to break it down further. The quarter onions were then separated from the peels on their own, and all he had to do was just use his bare hands to take the peel and remove it without any fuss.

The onion peeling hack got over a million views on Instagram and was appreciated by users all over the world. Netizens poured in their excited comments about how they used the hack to peel onions easily without having to spend hours on the traditional cumbersome method. Some people also commented that they knew about the hack already! Others questioned why it was necessary to peel an onion this way since it faced the risk of being smashed completely and would be difficult to work with further. Some other users also pointed out to the fact that the onion had already been cut into half, so this purpose of the hack was defeated in the first place.

What did you think about this onion peeling hack? Tell us in the comments below!