The Christmas lunch at the Kapoor household is an annual tradition started decades ago by Shashi Kapoor's wife Jennifer Kendal. 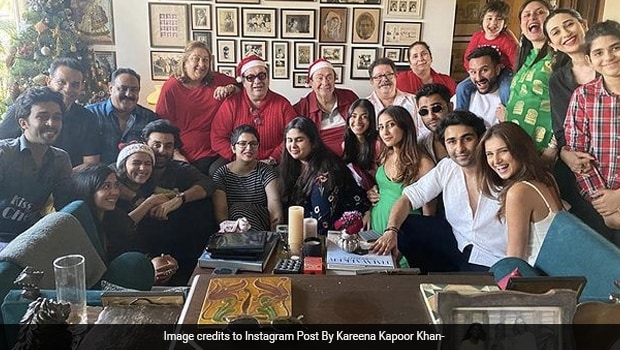 The pictures of the lunch were shared by many on Instagram including Karisma and Kareena.

The Kapoor clan of Bollywood - Kareena Kapoor, Karisma Kapoor, Randhir Kapoor, Ranbir Kapoor and more gathered together for the traditional Christmas lunch at the Shashi Kapoor's house yesterday, on the day of Christmas. Ranbir was accompanied by actor Alia Bhatt for the occasion, which happens annually where the entire family comes together for a drool-worthy feast hosted by Shashi Kapoor's son Kunal Kapoor.

The pictures of the Christmas feast were shared by Karisma and Kareena on Instagram and we can't stop drooling over the perfectly-roasted chicken. Karisma Kapoor also posted a picture of Shaira Kapoor who was trying to cut the giant dish. Look at the picture and tell us you aren't tempted to join the party:

Incidentally Zahaan was the cook himself of all the mouth-watering dishes that the Kapoors noshed on as Kareena shared a picture of Zahaan Kapoor wearing an apron and wrote, "This chef deserves all the kisses..My Bro"

She then shared a customary family picture which saw everyone in attendance, including Aadar Jain who arrived with actor Tara Sutaria

Kareena also hosted a party with Saif Ali Khan at their home on Christmas eve, which too was a delectable affair with some of the most exotic dishes on the table and saw Soha Ali Khan, Kunal Kemmu and Karisma Kapoor in attendance.