Taapsee Pannu has begun preparations for her next movie Rashmi Rocket in which she plays a track athlete. 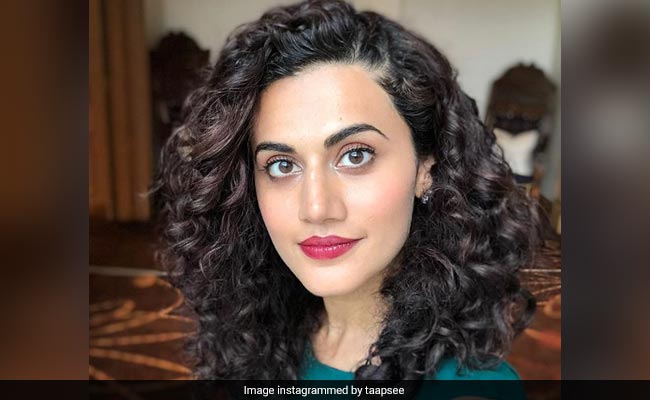 Taapsee Pannu shared a glimpse of her delicious diet on Instagram.

Taapsee Pannu's journey to mainstream Bollywood has been nothing short of a spectacle. Her transition from Telegu to Hindi cinema has proved her versatility as an actor and has gained her immense recognition beyond borders. Her roles in movies such as 'Baby', 'Badla', 'Pink', 'Thappad', and more have been applauded both critically and commercially. The actor, who is known to play unconventional roles, was last seen in the movie 'Saand Ki Aankh' alongside Bhumi Pednekar, and is now all set to play a track athlete in her next film, 'Rashmi Rocket'.

The preps for this sports-based movie has already begun and Taapsee is leaving no stone unturned for the same. After revealing her look in the movie (on Instagram), she recently posted another picture of how she's prepping up for the role. In the picture, Taapsee is seen happily gorging on some yummy homemade sweet potato tikkis with what looks like a tantalising mint chutney. And guess what, that's her diet!

(Also Read: 13 Diet And Fitness Secrets Of Taapsee Pannu You Must Know)

"This is how prepping for #RashmiRocket looks like! Starting off my day with this carb-rich breakfast planned by my fuss free @munmun.ganeriwal. As she says, working to get an athletic bod isn't about eating only proteins. Keeping the right balance is important. On my plate are sweet potato tikkis which @munmun.ganeriwal recommends for its high fibre content and I recommend for its great taste! Bon appétit", she wrote in the caption. Have a look at her post here:

Sweet potatoes are filled with fibre and complex carbs that take time to break down and digest, thereby, giving you a feeling of fullness and also preventing blood sugar spikes. Having a diet with a little bit of carbs in the diet is considered good by many experts. Seems like Taapsee's nutritionist knows how to strike the perfect balance, and the foodie in the actor seems to love this scrumptious diet for sure!