Watch: This Viral Video Of Baby Rubbing His Food Over His Belly Is Too Adorable

The video of one year old baby boy Albie rubbing Bolognese sauce on his cute belly won the collective hearts of the internet. 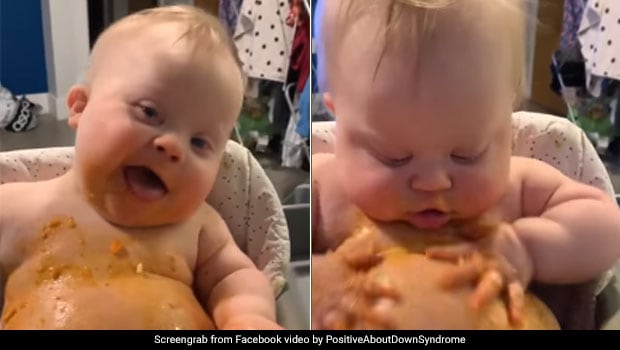 Albie's video of rubbing spaghetti on his belly went viral on social media.

Baby videos are internet winners - whatever babies do, the internet loves it! One such recent video that went viral on social media was that of baby boy Albie Dunville. He was having spaghetti for dinner made by his mother Emma Ayers. He got the concept of eating quite correctly in the sense that he understood food must go into the belly. But the adorable part was that he chose to rub it onto his tummy from the outside rather than through the mouth. The video of him enjoying the rubbing of the Bolognese sauce on his cute belly won the collective hearts of the internet. Take a look:

The video was shared by an online community called 'Positive About Down Syndrome' that regularly shares motivational photos and videos. Albie is just one year old and has Down's Syndrome as shared by his proud 30-year-old mother Emma on the community page. He was being fed from a tube until he turned five months old. Doctors encouraged Albie's parents to let him play with food as part of his progress, but Albie's rubbing food over his belly was quite a surprise for the family too.

While parents are usually concerned about letting their children get their hands messy, Albie was enjoying it through and through. His mother Emma was giggling in the background, and made no attempts to stop him from having his share of fun. Baby Albie seemed to be happy to see how pleased everyone was with his smearing Spaghetti sauce on his belly. The video got 35 million views in a single week, and reactions poured in from gushing Facebook users.

"There's a certain logic to him - the food ends up in the tummy so let's bypass the eating bit," wrote one user. Another complimented Albie on his cute little belly, saying, "A belly like that deserves to be covered and rubbed with food. Just too adorable!!" Several users also complimented Albie's mother Emma for letting her son do what he finds pleasure in. "It bought him joy and that is the most important thing in a child's development - fantastic to see and glad people are not passing judgment as there is NONE to make. Well done Albie mum!" wrote a user on the video's comments.

When it's food and it's about enjoying it, there are no rules. Whether it is as a food item or a play thing, the happiness factor is there in both!