Spaghetti in a Cone: A Genius Food Delivery System 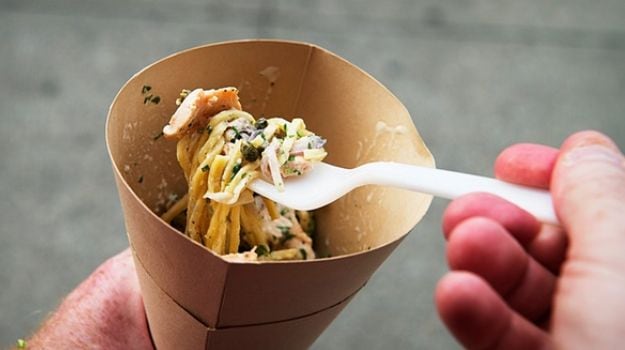 Spaghetti cone: a ridiculous-sounding idea … until you try it. Photograph: Devon Knight for the Guardian

How can something that should be so wrong be so right? A restaurant on the Lower East Side of New York has invented the perfect late-night food-on-the-go.

I am a person who finds fault with the world. I try my best not to be unpleasant about it, but I wish that many things were not as they are. It would be better, for instance, if it weren't so hot outside. Dogs should not be allowed in New York City, nor should duck boots " which belong in a swamp. Christmas is stupid and ought to be cancelled.Ketchup does not belong on hot dogs, and Will Ferrell isn't funny.

So when I was given the assignment of eating and reporting on the latest innovation in modern street food, the spaghetti cone, created by chef Emanuele Attala and available at his new restaurant, the Spaghetti Incident, on Manhattan's Lower East Side, I was prepared to do some quality complaining. It is, after all, a ridiculous-sounding idea. Why would anyone want to eat spaghetti out of a cone?

But however frivolous and gimmicky it might seem, the spaghetti cone is a highly utilitarian innovation. A cardboard cone, it turns out, is an ideal delivery system for spaghetti. Better even, in ways that I'll get to in a moment, than a ceramic plate or bowl.

Spaghetti is a surprisingly satisfying food to eat while walking around city streets, especially coated with Attala's delicious sauces. There are eight "cone" varieties, ranging in price from $8 to $12 and I have tried six of them. Two were outstanding: the puttanesca and the trevigiana. The trevigiana is pancetta, pine nuts and radicchio in a cream sauce and the bitterness of the radicchio balances so nicely with the salty pancetta and the cream sauce and, yes, yes, very much yes: I want to eat spaghetti out of a cone again very soon.

What I'm saying is: the spaghetti cone is a miracle of physics

Attala, 53, came up with the idea for the spaghetti cone after looking at old photos of his hometown, Rimini, on Italy's Adriatic coast. In the 1950s, when the city was recovering from the destruction of the second world war, locals began throwing beach festivals to draw visitors and spur the economy. Vendors set up booths on the sand, there were bonfires and concerts, and the butchers and fishmongers would rip sheets of wax paper off their rolls, curl them into a cone, and serve food out of them like a bowl. Strolling partiers took their meals to go.

If you've been to the Lower East Side at night-time during the past 10 years, it's easy to see the similarities. The sidewalks are as crowded as the bars. New York City, like much of the world, is besotted by food-on-the-go. Food trucks abound, and people walk and eat as if tables had never been invented.

On Monday night, I stepped out of The Spaghetti Incident with my puttanesca cone and headed East.

A trio of blondes, two women and a man, all much younger and better looking than I am, clutched arms as they passed me going in the other direction. One of the woman gasped as she saw what I was carrying. "Was that one of those spaghetti cones?" I heard her ask as she passed by.

Eating spaghetti out of a cone is, oddly, easier than eating it from a plate. This is because of the well-known "twirl method" that sophisticated humans have learned to use to eat pasta. The cone shape facilitates the trick by giving natural purchase to the tines of the fork as they twist. The curved sides of the cone help guide the strands of spaghetti into a ball around the fork. (Emily Post recommended using a spoon to achieve the effect). The twirl negates the need for spearing any bit of food with the fork.

Attala experimented with serving penne and gnocchi, out of the cone. It didn't work because there is no flat surface against which to pin your target. Nothing else eats so easily out of a cone. What I'm saying is: the spaghetti cone is a miracle of physics.

The cone also provides advantages in maneuverability. The pointy end serves as a handle for a bowl. You can hold it right under your fork as you lift each bite to your lips, so as not to lose a single caper to the sidewalk. It makes for remarkably neat, spill-free eating.

The cone does have some shortcomings. Eating a spaghetti cone is a two-hand job. Please, God, let my editors leave that phrase as is. It cannot match the convenience of a folded slice of pizza (my vote for Greatest Walking-food Invention In the History of Man, and surely, John Travolta's, too) or a reasonably-sized hot dog. You can eat a slice of pizza and stare at your phone screen while you walk out into traffic and get hit by a car. The spaghetti cone requires slightly more focus, and one more hand.

But I'll take a spaghetti cone over a falafel or a burrito or a wrap, convenience-wise, any day. I've never eaten any one of those items on the street without dumping half of it out on to my arm and my clothes and the ground. (Biting into tinfoil, which seems to happen every time, too, is like fourth-circle-of-hell material for me.) Same goes for a lobster roll. How many wonky-shaped chunks of delicious lobster meat have I watched bounce off my foot into the dirt? About $45,000 worth, that's how many. A street lobster roll is a precarious pile of heartbreak just waiting to happen.

As I finished my puttanesca cone, I found a dark, emptier stretch of street where floor-to-ceiling plate glass windows displayed the art in an art gallery " closed for the night, but with some of the works illuminated.

A car passed, and the headlights shining from behind me turned the window into a mirror for a second. I saw myself standing there holding my spaghetti cone and fork.

Did I look ridiculous? Would I complain about myself, a 44-year-old man eating a trendy on-the-go food novelty, as I do so many other pretentious things?

No, I looked perfectly normal. I could have been holding anything; a magazine, an ice cream (duh), a bouquet of flowers, a camera.

I took another bite. Damn, I love anchovies. And damn if there aren't exactly as many capers in this sauce as there ought to be. Spaghetti, it turns out, is a truly wonderful thing to be eating on the sidewalk, at midnight, out of a cone.