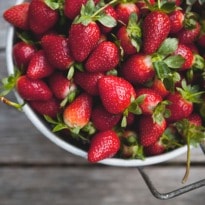 In a first, a nine-day 'Strawberry Festival' got under way over the weekend across the state in select malls to promote it as a tourist destination through strawberries. "We have selected five centrally located malls in Mumbai, Pune, Nagpur, Nashik and Aurangabad where the farmers will directly sell their produce to the customers during the festival," Nayna Bondarde, Maharashtra Tourism Development Corporation (MTDC) regional manager at Pune, told IANS.

The timing could not have been more apt - markets across the state are flooded with baskets of the fresh fruit which are lapped up by the people, though the prices are a bit on the higher side this year. Restaurants and ice-cream parlours have joined the fray by adding fresh strawberry as a must item on fruit salads, ice-creams, crushes, juices and milkshakes on their regular menus.

Until now, the 'Strawberry Festival 'had been celebrated on a modest scale in the Mahabaleshwar-Panchgani twin hill-stations and Pune, but now, with MTDC backing, it has been catapulted on the state's tourism map. "After all, Maharashtra produces around 30,000 tonnes of strawberries annually worth more than Rs 100 crore ($16 million)," Strawberry Growers Association of India President Balasaheb Bhilare said.This accounts for around 80 percent of the country's total strawberry produce, with Mahabaleshwar-Panchgani topping in terms of size, taste and quality, he added. Being a delicate, highly-perishable commodity, around 80 percent of the production makes to the dinner tables, Bhilare said.

The remaining around 20 percent is used for commercial foods production like jams, jellies, confectionery, squashes, juices, ice-creams, and the like, through some of the big players like MAPRO, Mala, Manama, Pure Berries and Madhusagar and smaller companies mostly based in and around Satara district.

Explaining the rationale behind the fest, MTDC General Manager Kishori Gadre said that strawberry needs to be promoted aggressively both among the people of the state and other domestic markets. "Already the state is famous for its mangoes which are being savoured across the country and even globally. But strawberry being highly perishable needs faster consumption; What better way than tourists coming to Maharashtra to enjoy the fruit fresh?" Gadre said.

Accorded the Geographical Indication (GI) Tag since 2010 (akin to a patent), Bhilare said that strawberry needs a stable, cool but dry climate of 18-25 degrees C to thrive and this is available mostly in the Mahabaleshwar-Panchgani mountains in western Maharashtra.

As far as festivals go, strawberry joins the list of fruits like mango, orange, chickoo and grapes which are celebrated annually in the state. The grape festival has an added incentive - coinciding with wine production - which has successfully lured tourists.

Bhilare said that the main strawberry growing season is October-March on around 3,000-4,000 hectares in the region, engaging around 5,000 farmers. "It starts after monsoon and ends as the temperature starts warming up. Though it takes around two months to grow and ripen, we can manage only a single crop per season," Bhilare said.

Efforts to increase the output by two or even three crops per season would entail heavy investments in technology and related aspects, which is not at present possible. "We lack proper cold storage facilities at various points; so we are not able to exploit the export potential and earn forex for the country. But, now with FDI in retail, we are starting to deliver strawberries from the farms to homes directly with great benefits for the growers and consumers," Bhilare explained.

Efforts are also under way to identify other areas in the country for growing strawberry. Himachal Pradesh, Uttaranchal, Haryana, Rajasthan, Karnataka and Tamil Nadu are growing the fruit in small quantities, while experiments are under way to grow it in Arunachal Pradesh. Globally, strawberries are grown in huge quantities in Australia, the US (California and Florida), Italy, Germany, Spain and France.