Bringing Out the Chef in Children 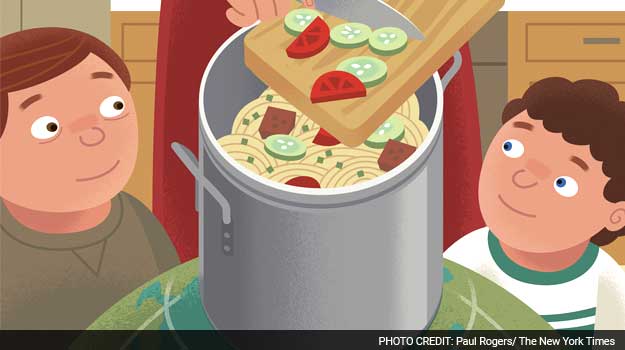 "I had no idea the world of food was so big. There are so many simple, tasty foods from all these cultures that are so easy to make. You don't have to eat them in a restaurant or be a trained chef to prepare them."

This is what Lynn Fredericks, the creator of FamilyCook Productions, discovered when, divorced with two young sons, she sought to reduce tension in her household by enlisting the boys' help in the kitchen and introducing them - and herself - to cooking healthful, easy-to-prepare and delicious foods, and eating them together in a civilized fashion.

You might call it gracious dining: cloth napkins in rings, tea lights, flowers occasionally and, most important of all, no TV, mail or toys at the table.

"The food industry keeps telling parents to go out to eat and order from the children's menu for the kids," Fredericks said. As an alternative to the ubiquitous burgers and fries, mac 'n' cheese and sodas, she said, "I began offering cooking workshops for young mothers, encouraging them to use some time each day to connect in a happy way with their children."

What began as a personal mission grew into a nonprofit organization, now 20 years old, that teaches schoolchildren and their families the delights that can ensue from preparing affordable, fresh and tasty foods that benefit their health and well-being.

Though lacking credentials in dietetics, Fredericks was aided by two experts, Mercedes Sanchez, a food-loving dietitian who grew up in Spain and who specializes in one-pot cooking, and Antonia Demas, founder of the Food Studies Institute and creator of the "Food Is Elementary" curriculum that teaches children about organic gardening, environmental issues, plant-based nutrition and healthy cooking.

With support from foundations and government agencies, Fredericks and a number of professional collaborators created curriculums that teach nutrition through cooking for children in preschool through high school.

No elaborate equipment is needed. Classrooms can perform culinary miracles with just a sink, a portable induction stove and a good knife or two, Fredericks said.

"Parents initially looked at me as if I had six heads, and wondered why I was having the kids make Thai-inspired fish chowder and not mac 'n' cheese with broccoli," she said. Despite parental protests that "my kids would never eat that," the children really enjoyed the more exotic dishes they prepared, she added.

The programs, which have been field-tested with great success, provide nutrition education through hands-on cooking in schools and community organizations, on farms and in other settings around the country. The organization estimates it has reached more than 200,000 families, some members of which have gone on to become health educators themselves.

Fatima Basir of Brooklyn started in the program at 16 and lost so much weight - some 50 pounds - that her first summer out of college, she got a job at a weight-loss camp for children. Now 22, Basir works for the Harlem Children's Zone's healthy eating initiative.

Joel Allette, 21, who lost about 20 pounds as a teenage participant, is jointly talented in cooking and music. He now teaches Teen Battle Chef, a FamilyCook program, at Urban Assembly School of Music and Art in Brooklyn and has composed three songs for Fredericks' endeavor to promote healthy eating and exercise.

"You wouldn't believe how many kids lose weight in our program," Fredericks said. "No crash diets allowed. The kids know it's a lifestyle change."

But good health is hardly the only goal of her programs. Cooking by the children in schools is coordinated with lessons in mathematics, science and culture. For example, young children learn both math and portion control when divvying up a recipe for six among themselves. They learn where food comes from and the importance of sustainability, as well as food science and safety.

In preparing meals together, the children learn teamwork. And teens who participate in groups of six in the semester-long Teen Battle Chef program (fashioned like a TV show competition) hone their public speaking skills when describing the cultural background and nutritional value of the dishes they prepare.

"Teens do presentations for their parents, who are then more inclined to let the kids prepare foods at home," said Fredericks, who is also the author of "Cooking Time Is Family Time" and "Get Your Family Eating Right!"

The program inspires insight into other cultures and tolerance. While learning about Japan, for example, elementary school students might prepare a Japanese tea ceremony. "The world of food is a much bigger place, and it can be fun to explore the cuisines of other cultures," Fredericks said.

The emphasis, too, is on simple ingredients that can produce tasty and colorful dishes. "There's no need for special ingredients," she said. In making a stir-fry dish, the children learn to use whatever is in the fridge.

The program for preschoolers focuses on introducing children to a wide range of colorful fruits, vegetables and healthy snacks. An evaluation in Women, Infants and Children centers showed it increased the amount and variety of fruits and vegetables purchased at farmers' markets by participating families.

FamilyCook Productions uses a business model to train facilitators around the country. Some come from departments of public health, others from nonprofit organizations, as well as schools and community groups. Parents, too, can become facilitators. In addition to food preparation and teaching techniques, trainees learn how to store food and equipment, and must pass an assessment in food safety.

"We now have the capacity to train anyone anywhere because everything is online," Fredericks said.

She added that FamilyCook Productions is "constantly retooling our programs." For example, with a research grant from the National Institutes of Health, trained Teen Battle Chef students are working to improve high school wellness by sharing easy ways to make healthier foods and drinks with their peers.