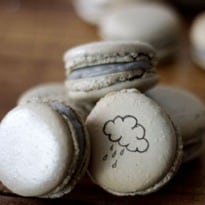 The woman behind the Depressed Cake Shop believes it can, and is hoping her pop-up shop will get people talking about it as well as raising money for mental health charities.

They say baking soothes the soul. How can it not? There is something so reassuring about the ritual - quietly weighing out butter, sugar, flour, cracking eggs, whisking, beating and folding. "If you're feeling a little bit down, a bit of kneading helps," Mary Berry once said. It is not just indulging in the end results - the cake, the biscuits, the scones - that helps to brighten up a blue day, but the therapeutic process itself.

This perceived connection between baking and good mental health has sparked an initiative that will see several pop-up bakeries opening across the UK. During the first weekend in August, the Depressed Cake Shop will open at venues in London, Glasgow, Derby, Cardiff and North Yorkshire, with the proceeds going to mental health charities.

There is plenty of anecdotal evidence to suggest that the organiser, Emma Thomas - aka Miss Cakehead - is on to something with this idea. John Whaite, who won the Great British Bake Off in 2012, recently brought out a cookbook, Recipes for Every Day and Mood, with a chapter dedicated to lifting the spirits. Whaite has experience of depression and describes baking as his escape. For him, it is "meditative", an act of "making something destructive into something constructive, and at the end of it you've got something to be proud of, something to eat, something to show off".

Novelist Marian Keyes has also used baking to help her deal with depression. In her book, Saved by Cake, she writes: "Baking hasn't cured me. But it gets me through ... To be perfectly blunt about it, my choice sometimes is: I can kill myself or I can make a dozen cupcakes. Right, so I'll do the cupcakes and I can kill myself tomorrow." Keyes and Whaite have spurred many bloggers to share stories of how baking helped with depression like this one who writes about how baking gave her a sense of achievement, or this young mother, who, overwhelmed after the birth of her baby, baked her way through Mary Berry's Baking Bible to help rebuild her confidence.

I know from experience how helpful baking can be. I baked fiddly vanilla biscuit thins in the days after my dad died. I don't know what spurred me into the kitchen, but baking tray after tray of biscuits let me focus on the present instead of my mind wandering into all sorts of places I wasn't ready for it to go. The simple act of bringing dough together and stamping out rounds gave me a focus. My biscuits kept burning at the edges, but eventually I got there. I don't recall now whether we even ate them, but I do remember that getting them right in the end made a small part of me feel good. That particularly difficult time has long passed, but, like a lot of people, baking still gets me through the odd days when things don't feel as if they are going my way.

"There's no scientific research to explain why or how baking helps to make you feel better, and it's certainly not a cure for depression. But it is therapeutic, and it helps many people," says Thomas (she was also behind the most repulsive cakeshop in the world, a pop-up at the pathology museum at St Bartholomew's hospital in London, selling cakes shaped into infected body parts to raise awareness of cancer and STIs). "Baking is creative, and instantly rewarding. I've realised that cake gets people talking, and the Depressed Cake Shop hopes to get people discussing mental illness and supporting mental health charities." Eventually, Thomas hopes to set up a series of baking therapy sessions and support networks across the UK.

The Depressed Cake Shop will be an antidote to vintage-styled bakeries selling fluffy pink cupcakes with sprinkles on top. Instead, the pop-up shops will sell cakes made by amateurs, many with personal experience of depression. There will be gloomy grey lemon-flavoured macaroons, clouds of grey meringue and dark grey cupcakes, whose colours will only be revealed on the inside.