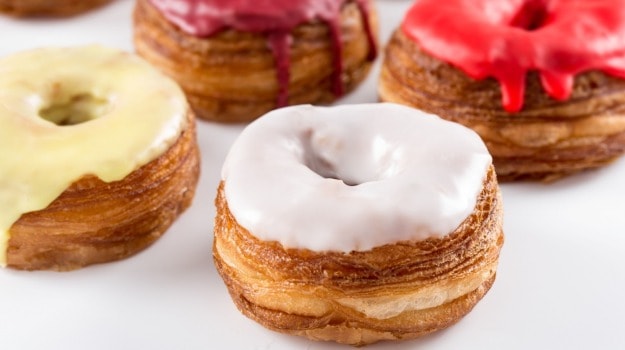 This week we're excited about being let into patissier Dominique Ansel's secret recipes, signing up for the Cookery School at Portland Street, and checking out the best coffee shops in Portland.

Dominique Ansel is as close as it gets to a rockstar in the pastry world. The Cronut - his insanely popular croissant-doughnut mashup - was one of Time's 25 best inventions of 2013. People still queue for it outside his New York bakery. There have been live reports from the Cronut queue, advice on how to jump it , and life-after-the-Cronut interviews, not to mention a million disappointing fakenuts. (The closest Cook got to a Cronut was a passable Crodough). Which nicely makes the point that Ansel himself is no fake - he is a Fauchon-trained, Michelin-starred, multi-award-winning patisserie polymath. And Secret Recipes From the World Famous New York Bakery(Murdoch Books), out this week, is about as close as you'll get to knowing how he does it.

As Cook knows only too well, reading a recipe book from cover to cover does not necessarily mean you will be miraculously imbued with the culinary knowhow of the author. Sometimes seeing how it's done and, crucially, attempting it yourself with the guidance of a nurturing tutor is the only way. Cookery School at Little Portland Street is an excellent London destination for novices and amateurs alike. They'll even teach you how to make your favourite signature dishes, such as J Sheekey's fish pie, or the Ivy's sticky toffee pudding.

Coffee in Portland: it's practically a PhD specialism, it's so big of a thing. Jerry Seinfeld recently devoted an entire episode of his web series Comedians in Cars Getting Coffee to sampling the city's caffeinated wares with Fred Armisen from Portlandia - a thing of beauty in itself. But if you're actually headed to the Pacific north-west and fancy a brew, check out firstwefeast.com's Ten Essential Portland Coffee Shops. We heart Heart (No 4 on the list).

If, instead, you prefer to do the brewing yourself, try a cloth coffee filter. The Hario Woodneck Drip Pot (from £35) comes in two sizes with cloth filters sold in packs of three (from £10). They're reusable and, according to those in the know, they make a great brew, too.

As well as live reports from the Cronut queue and advice on how to jump it, there's also been a million disappointing fakenuts. Photograph: Alamy