Frozen foods to be cooked, not just reheated - New study 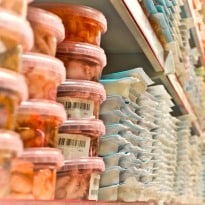 If you think frozen meals are ready to eat and just need to be reheated in microwaves, get alarmed. Rather, let the meal stand for the recommended time in the microwave before you start eating, shows new research.

An investigation into a case where 44 people got food poisoning after eating frozen chicken-and-rice meals in 18 states in the US revealed that the outbreak of Salmonella bacteria - that caused food poisoning - was owing to "improperly" microwaving food.

Most of the people who fell ill cooked frozen meal in a microwave but not all of them let the meal stand for the recommended time inside before they began eating, said a press release from Atlanta-based Center for Disease Control and Prevention (CDC).

Follow all directions when it comes to microwaving food - including letting food 'stand' after cooking, it added. Microwave standing time is part of the cooking process. "Microwave cooking is a critical control point to ensure raw and uncooked ingredients reach a sufficient temperature to render them safe from microbial hazards," the report said.

Manufacturers should provide step-by-step cooking instructions on frozen meals that account for variability in microwave wattage, it said.