How does alcohol affect your athletic performance? 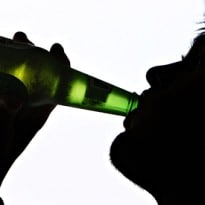 The odd drink won't send you off course, but any more than that and it's one step forward, two steps back

When preparing for a big race like a marathon, it's easy to see alcohol as something of a comfort blanket, especially after a hard evening's slog in the cold and rain. However, while the odd glass of wine won't result in anything amiss, it's important to realise the potential implications of excess alcohol on your training programme. Five or more drinks on a Friday or Saturday night could wipe out the hard-earned results of months of hard graft.

Professor David Cameron-Smith of the University of Auckland studies the effects of alcohol on the finely tuned biological processes that all athletes are looking to optimise.

"One of the key determinants of success is not just event-day performance, but the continuous gains and improvements that are made through the long, arduous grind of training," he says. "Most people should be aware of the impact alcohol has if you consume it the night before a race, but not everyone appreciates the disruptive impact it has on the way your body adapts to handling the training, and that's the most important part."

In particular, alcohol can make you far more prone to injury, and that happens in a variety of ways. It alters the sequence of the different phases of your sleep cycle, which reduces your body's ability to store glycogen - a crucial energy source that you need for endurance - as well as increasing the levels of the stress hormone cortisol, and that slows down healing. This is still the case even if you stopped drinking six hours before you went to bed.

Cortisol substantially reduces the levels of human growth hormone by as much as 70%. This chemical is vital for both building and repairing muscle tissue, something you need more than ever when you're putting your body under increased strain as you try to ramp up your training.

But it isn't just the amount of nourishment you get from sleep that takes a battering. The presence of alcohol in your body triggers a multitude of chemical processes, including the release of a toxin from your liver that attacks the hormone testosterone, another essential component for allowing your muscles to grow and regenerate.

Alcohol is also classed as a powerful diuretic, a substance that promotes the production of urine, meaning it can severely dehydrate your body for up to a week depending on how much you drink. While dehydrated, you're at greater risk of sustaining musculoskeletal injuries such as cramps, muscle pulls and strains, and your appetite will decrease, despite the fact that you still need to be consuming the same amount of food as before to fuel your body for training.

If you do drink, it's important to consume as much water as possible in the following days because, once alcohol is absorbed through your stomach and small intestine, it has a negative effect on the water balance in your muscle cells. The combination of this and alcohol's inhibitive effect on gluconeogenesis (a process in which the sugar glucose is formed) prevents these cells from performing their natural function of producing a compound known as adenosine triphosphate (ATP), which is the energy your muscles need to contract. If your ATP levels go down, so will your endurance.

And perhaps most importantly, recent research has illustrated the effect of alcohol on the body's largest tissue - skeletal muscle. This is the tissue that covers your skeleton, holding both bones and joints in the correct positions and controlling pretty much every body movement.

There is a period of muscle protein synthesis, the process via which muscle cells generate new proteins, which is necessary for the skeletal muscles to benefit from training by recovering, growing and adapting. Without this, you would never improve and you would be constantly injury-prone. Alcohol has an enormous impact on muscle protein synthesis, reducing it by up to a third.

But it's not all bad news. Drinking certain types of alcohol in moderation can even be potentially beneficial. Red wine contains a chemical known as resveratrol that reduces your blood pressure, and consequently protects your cardiovascular system.

However, Professor Cameron-Smith says there are far better ways to consume such useful substances.

"Some forms of alcohol are indeed full of excellent and beneficial antioxidants and anti-inflammatory compounds that have interesting biological effects," he says. "But the same can be said for broccoli, brussels sprouts and a whole host of fruits and vegetables. Drinking alcohol for antioxidants is an excuse - plain and simple. Eat better and eat your veggies and fruit."