Knives Out: Why We Love Reading Cruel Restaurant Reviews 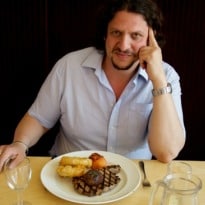 As a food critic, I know that people love the negative reviews and that it's more fun to read and write about the bad meals than the good ones

Where restaurant criticism is concerned it is hate that springs eternal. Sure, people may enjoy restaurant reviews in general, but what they really love are the takedowns. Pete Wells of the New York Times is undoubtedly well read, but it was his 2012 review of cable TV star Guy Fieri's American Kitchen and Bar, phrased as a few dozen questions - "Did panic grip your soul as you stared into the whirling hypno wheel of the menu ... ?" - which became a national talking point. Times restaurant reviews tend to attract a few dozen comments; the Fieri review garnered over a thousand.

I had a taste of that a couple of weeks ago. My somewhat negative review of Beast, an unintentionally hilarious steak and king crab place in London, went viral. It may have had something to do with my suggestion that the beef was so expensive they should, for the price, install the animal "under the table so it can pleasure me while I eat". Usually my reviews are shared a few hundred times on Facebook. This one has been shared 17,500 times and has been viewed around 10 times more than any other.

Certainly, when I decided to produce an eBook of my reviews I realised there was little point including all the positive ones. However I might wish it otherwise I knew nobody really wanted to read those. As a result My Dining Hell contains 20 of my most negative assessments, with a bit of commentary. It has since spawned a live show - think of it as "these are a few of my most hated things" - which I'm performing all over the UK and now bringing to Brooklyn.

Hurrah for me; there's clearly a buck to be made from being negative. Not that I ever seek out bad experiences. Sure, I like my columns to be read as much as the next narcissistic hack, but I like a good dinner even more. Bad restaurants are, like colds and car crashes, things that just happen to me. The question is, why do people like reading about them?

Partly I think it's to do with the language. As bleak as it may sound, the story of good times is simply less compelling than those of bad. As the late Nora Ephron once said, if you describe a cake as "light as a feather" you have nowhere left to go. You are into the language of watering mouths and baby's kisses and silken sheets. A restaurant review should not make you feel sickly. Unfortunately the positive ones risk doing just that.

Negative narratives, however are a different matter. The vocabulary of the bad is just that much more enthralling. Critics may pretend that it's not easier to write a slating. They're lying. The negative toolbag is full to bursting. They are literary freeway pileups, complete with a license to rubberneck. And that's the point. When a critic takes aim at a lousy restaurant there is a sense that they are exacting revenge for all of us on every bad experience we've ever had: we paid good money; we had a terrible time; now someone else is paying the price.

And then there's what psychologists call social comparison theory. We are constantly trying to work out how we're doing in life, to feel better about ourselves. If, one morning over a weekend, we get up and read a lousy review of a terrible restaurant we immediately know that whatever else is going on, we're probably having a better day than the poor sap of a chef who cooked that meal. Are such reviews kind? Probably not. Are they subtle? Rarely. But are they entertaining? Oh yes, and a damn sight more so than the meals which inspired them.