Meet the Maker of the Drug That Treats Binge Eating Disorder 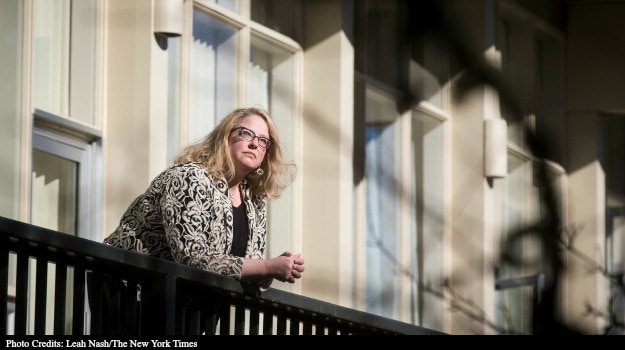 The retired tennis player Monica Seles spent this month making the rounds of television talk shows, appearing on everything from "Good Morning America" to "The Dr. Oz Show" to share her personal struggle with binge eating.

"It took awhile until I felt comfortable talking about it," she said in a People magazine interview, explaining that she secretly devoured food for years while she was a professional athlete. "That's one of the reasons I decided to do this campaign: to raise awareness that binge eating is a real medical condition."

But that is not the only reason. Seles is a paid spokeswoman for Shire, which late last month won approval to market its top-selling drug, Vyvanse, to treat binge-eating disorder, a condition that once existed in the shadow of better-known disorders like anorexia and bulimia but was officially recognized as its own disorder in 2013 by the American Psychiatric Association.

As Shire introduces an ambitious campaign to promote Vyvanse but also to raise awareness about the disorder, some are saying the company is going too far to market a drug, a type of amphetamine, that is classified by the federal government as having a high potential for abuse. Shire's track record is adding to the worry: The company helped put another once-stigmatized condition - attention deficit hyperactivity disorder - on the medical map and made billions of dollars from the sale of drugs, like Vyvanse and Adderall, to treat it. In recent years, federal officials have cited the company for inappropriately marketing Vyvanse and other ADHD drugs.

In addition, some drug safety experts questioned why the Food and Drug Administration so swiftly approved the drug for binge eating - seeking little outside input - despite the fact that, for decades, amphetamines, which suppress the appetite, were widely abused as a treatment for obesity.

One prominent eating-disorder specialist said that although Vyvanse showed promise, other treatments, like talk therapy, had more research behind them. "Once a pharmaceutical company gets permission to advertise for it, it can often become quite widely prescribed, and even tend to be over prescribed, and that's a worry," said Dr. B. Timothy Walsh, professor of psychiatry at the New York State Psychiatric Institute at Columbia University.

In a statement, Shire said it was committed to appropriately marketing Vyvanse. "We always communicate the potential risks of Vyvanse to health care providers and patients, and we emphasize the importance of prescribing and using Vyvanse within its approved product labeling," the company said.

A spokeswoman for the FDA said Vyvanse was granted priority approval because there was no other drug treatment available for the disorder. And it did not ask an advisory committee to review the issue because Vyvanse is already sold as an ADHD drug and its safety profile is well known.

The marketing strategy for Vyvanse, like that of Adderall, sheds light on how pharmaceutical companies seek to influence the diagnosis and treatment of a medical condition - in an effort to make billions of dollars in sales - even in the face of concerns about potential dangers of a drug.

Days after Shire gained approval, Seles began touring media outlets. And patient advocacy groups - freshly infused with donations from Shire - began driving social media traffic to a company website that provides advice on how to raise the issue of binge eating with a doctor. Shire is ramping up a national print and online advertising campaign, and since last year has been raising awareness about the disorder among doctors.

Vyvanse is Shire's top-selling drug, bringing in close to $1.5 billion in sales in 2014. Shire's chief executive, Dr. Flemming Ornskov, recently said he expected the binge-eating approval to eventually contribute between $200 million and $300 million to annual sales of Vyvanse.

In 2011, the FDA cited Shire, which is based in Dublin, for misleading advertising, and last fall the company paid $56.5 million to settle federal charges that it improperly promoted Vyvanse, Adderall and other drugs.

Among the allegations, which Shire denied, was that the company played down Vyvanse's addiction potential and said it would prevent car accidents, divorce, arrests and unemployment.

With the approval of Vyvanse for binge eating, "now we have another reason for the public to learn about the glories of amphetamine - it's very worrisome," said Dr. Lawrence H. Diller, a behavioral pediatrician in Walnut Creek, California, who has written about ADHD drugs. "My hat's off to Shire. They've done it again."

Diller and others said Shire appeared to be following a familiar drug industry playbook by promoting awareness of a disorder, in this case binge eating, before more directly marketing its treatment. A company website, www.BingeEatingDisorder.com, makes no mention of Vyvanse but provides detailed information about how to talk about the disorder with a doctor, including a printable symptom checklist and sample opening lines to start the conversation. The site also tells patients "don't give up" if a doctor initially resists.

Some experts in prescription-drug abuse said the content was troubling because it appeared to coach patients about how to receive a diagnosis for a relatively uncommon condition, or shop for a new doctor if they were not successful. Advocates for people with the disorder, on the other hand, said such advice was necessary because binge eating is still highly stigmatized.

To be diagnosed with the disorder, patients must experience at least one episode of uncontrollable eating per week for at least three months, and the binges are usually followed by a deep sense of shame. An estimated 2.8 million Americans are said to suffer from the disorder.

Many doctors "haven't been educated; they don't know what to look for," said Chevese Turner, who describes herself as in recovery from binge eating and is the founder of the Binge Eating Disorder Association, a nonprofit group that received a $100,000 donation from Shire last year. She said the grant was limited to raising awareness about binge eating and that her organization did not promote Vyvanse.

In a telephone interview, Seles said she agreed to participate in the awareness campaign because she wanted binge eaters to know that treatment was available and that they were not alone. She declined to say how much she was paid and said consumers would have to make up their minds about what kind of treatment was right for them.

"Every time I turn on the TV, there are different food companies telling me to eat this burger, eat these chips," she said. "I have to make the educated choice of what I want to do. It's the same thing here."

Several drug safety and addiction experts said the approval was of particular concern because of amphetamines' troubled history as a treatment for weight loss. Vyvanse is converted by the body into an amphetamine when it is swallowed.

From the 1940s through the 1970s, the drugs were commonly prescribed to overweight people who then became addicted. After public outcry and tighter government controls, companies stopped selling amphetamines as obesity treatments and their use is now tightly restricted. In 2012, the FDA approved Qsymia, a drug combination that treats obesity and contains the amphetamine phentermine, although unlike

Vyvanse, it is classified by the federal government as having a low potential for abuse.

The FDA expressly forbade Shire from promoting Vyvanse as an obesity drug, but some drug safety experts said they worried its weight-loss attributes could be attractive to people who habitually overeat. The company says about 80 percent of people with the disorder are overweight or obese. Weight loss and appetite suppression are a common side effect of amphetamines.

"There's so many reasons to be concerned about this," said Dr. Andrew Kolodny, the chief medical officer of Phoenix House, a drug treatment organization.

He questioned why the FDA approved the new use of Vyvanse so swiftly and said that given amphetamines' troubled past, more caution was necessary. "We had a horrible experience with amphetamines in this country, so the fact that this would just get rushed through without even bringing it before an advisory committee is especially concerning," he said.