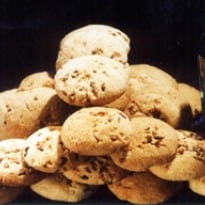 The soft crumbly nankhatai brings back many a fond memory. The word 'Nankhatai' comes from the Persian word 'Nan' meaning bread and 'Khatai' probably comes from 'Catai' or 'Cathay', the older name for China. Thus, translating as 'Bread of Cathay'. Another version from Northeast Iran or Afghanistan is a type of biscuit, also referred to as Kulcha-e-Khataye.

The history of the nankhatai in India is quite interesting. Towards the end of the 16th century, a couple of Dutch dudes set up a bakery in Surat to cater to the needs of the local Dutch populace. When the Dutch were leaving India, the owners handed over the bakery to a very enterprising employee, a Parsi gentleman Faramji Pestonji Dotivala. Since the bread was made with palm toddy for fermentation, it didn't find favour with the local Indians. In order to save his bakery, Mr. Dotivala started selling the old bread and puff, which became dried, at a really cheap price. This dried version became so popular that he started drying the bread before selling it. Later, the dried version came to be known as the 'Irani Biscuit'.
Mr. Dotivala, quite the entrepreneur and experimenter, then created the Farmasu Surti Batasa or butter biscuits, which are still very popular. He also created the now famous Nankhatai as an interpretation of a local sweet from Surat called 'Dal' and also probably inspired by the Irani or Afghan Khatai. I'm not sure of the exact recipe used by Mr. Dotivala for his original Nankhatai, but my childhood memories are filled with a far more crumbly-textured Nankhatai than what we encounter today, but the smell near the Nankhatai-wala was intolerable!Back in the days, ammonium bicarbonate was used as a raising agent in place of  baking soda. Ammonium bicarbonate has also been used for centuries in China to make Chinese almond cookies and steamed buns. Hence, I believe, the reference to China or 'Cathay' in Nankhatai.

The traditional Indian biskoot is a dying tradition, fast being replaced by the likes of the dunkin' Oreos and the constipation-curing McVitties and it doesn't really help if our Bolly-stars like Bipasha-di and Hrithik-ji are putting their entire weight behind either the 'phoren' or the 'desi' conglomerates. I'm not sure if the humble nankhatai-wala can hold out for long against the marketing blitzkrieg unleashed by the big companies. And if that's not enough, come January 26th and every other major festival. The cops would start harassing the nankhatai-wala to shut shop early. Not to mention that their battle against the Municipal Corporation of Delhi is ongoing and all year round.
Raju Bhai making nankhatai at his hand-cart near Chawri Bazaar in New Delhi
But the decreasing popularity of the product is troubling them more than anything else.You can get nice tasty nankhatai from any of the pushcarts, pretty much all across Old Delhi. But its a bit of a hunt as they keep moving from place to place. A sure shot place to get Nankhatai is the Main Market in Pahargunj. I find the nankhatai most enjoyable. I hope you do too.

Listen to the latest songs, only on JioSaavn.com
Chowder Singh started blogging in November 2011 on Indian street food, small restaurants and hole-in-the-wall kind of places that in spite of producing brilliant quality food, are largely unrecognised outside of their localities. He believes that these are the real heroes of Indian food, who have been consistently putting out their family recipes over many years and now will hopefully get more recognition for the superb work that they've been doing.