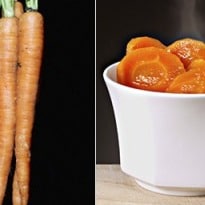 From almonds to tomatoes, we often love one version of a food (ketchup) and hate another (raw slices). What is the science behind our preferences - and what are your taste quirks?

Different forms of the same food can provoke polarised reactions in individuals. Take carrots. A lot of people say they hate them cooked, and yet they enjoy them fresh. A prolific commenter on this website who goes by the handle Ubermensch1 recently declared that he or she (you never know when avatars are concerned) loves tomato ketchup but, conversely, loathes fresh tomatoes. I even have a friend who wouldn't eat an orange if you paid her, but drinking its juice is just fine. This strikes me as odd, because oranges are pretty much balls of orange juice. Each to their own world of taste.

I'll allow that ketchup and fresh tomatoes are quite different animals. Ubermensch1 hates tomatoes for their "bitter taste" and the "leathery feel" they have on the inside (really? A tomato?). Ketchup, on the other hand, is sweet and savoury - cooked or extra-ripe tomatoes provide extra-savoury, umami deliciousness - with a smooth and viscous texture. They're still both essentially tomatoey, though, whereas I have never been able to fathom how almond-flavoured items, such as amaretti biscuits and marzipan, can taste so revoltingly not of almonds.

When people say they detest cooked carrots, they generally mean boiled (although the sickly-sweet glazed variety my dad used to do also springs to mind). The most obvious sensory attribute that is missing from a boiled carrot is the crunch. The sound of crunching while eating enhances our perception of freshness, irrespective of taste. And our teeth and jaws appreciate foods that allow them to do some mighty chomping once in a while. A floppy carrot, therefore, can be disconcerting.

And, of course, the effects that cooking has on the taste are myriad. They way we chew soft, cooked carrots will cause different flavours to be released, according to food scientist Lindsey Bagley. Furthermore, she says, "chemically, there are more sugars in a raw carrot than in a boiled carrot", which will have leaked sweetness into the cooking. As well as their inherent sweetness, she continues, "carrots can have a harsh, sometimes earthy or woody flavour character. And young 'baby' carrots have a green, parsley-type flavour." With minimal boiling (blanching) to retain flavour, many of these attributes will be enhanced because they are being eaten warm, which brings out and intensifies these flavours. I would argue that blanching is preferable to boiled carrots, which are eerily bland (and get extra loathesome points if they're crinkle-cut).

But that's not all. Cooking carrots also forms lipid droplets, which contain many of the flavour compounds, according to Mike Gordon, professor of food and nutritional sciences at the University of Reading: "As they move from cells into intercellular spaces, this could increase the flavour intensity." On the other hand, the "slightly acidic tissues" in carrots would lose some acidity to the water. So there's a lot going on there - all depending on the level of cooking, type of carrot and whose palate is doing the tasting.

Of course, if you roast your carrots, it's a whole other ball game. Bagley says: "The flavour and sweetness will be intensified, but also a caramelisation note is added as the sugars brown." It is easier to retain some bite in a roasted carrot, too.

The almond conundrum is an odd one. Only very occasionally have I eaten an almond that has a hint of that overpowering, acerbic "almond essence" you find in marzipan. The flavour is usually paired with a disturbing dry sensation, and I either assume the nut has gone bad or is horribly underripe.

It turns out that almond essence comes from a different nut to those gentle, creamy ones we eat: the bitter almond. We don't eat bitter almonds because they're not as nice and they contain a type of cyanide. An adult would have to eat 40 or so of them to experience ill effects, but still, the poison's presence is unappetising. Worry not, though, for sometimes benzaldehyde - the chemical compound that gives off this amaretto flavour - isn't even extracted from bitter almonds. Apricot and cherry kernels are also common benzaldehyde sources.

The list goes on. My orange-phobic friend loves mangoes but hates mango juice. And how is it, I wonder, that I can be practically addicted to anchovies - but put them on a pizza and I'm transported back to being a militant anti-anchovy child? In short, we're all giant fusspots. Which foods do you love in one form but hate in another?