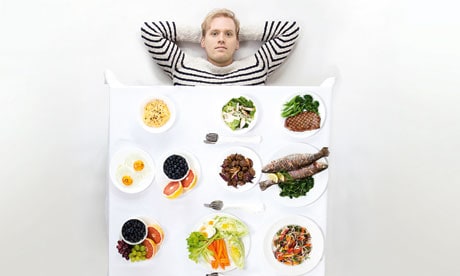 Eaten too much over Christmas? Thinking of going on a diet, but not sure which to plump for? One man spent a week testing out weight-loss plans to find out which you can stick with.

The first act of a new year is usually attempting to remove that pulsating tractor wheel of pudding and booze that's amassed around your waist over the past fortnight. But with so many different diets on the market, all making wildly different claims, choosing the right one can be difficult. Readers, this is where I step in.

Because I love you all dearly and equally, I recently spent an entire week on seven different diets, practising a different one each day - some well-known, some less well-known, some based on proven scientific merit, some because a celebrity had tried it and I'm an idiot. I wasn't really overweight before I went on this adventure, but we could all do with a post-Christmas cleanse. Nor did I consult a doctor first, which was probably quite silly. Also, many of these diets kick in only after a few days, so God knows what I was doing to myself, frankly. For seven days I was little more than a nutritional lab rat, so you probably shouldn't try replicating this at home.

What is it?A low-carb, ketosis-based diet, where your body metabolises its own fat content.

What can you eat?Fish, poultry, dairy, minimal vegetables and grains.

What they say "A powerful life-time approach to successful weight loss."

What Stuart says I start my week convinced this'll be a cinch. After all, I don't eat that much and have the iron will of a mighty ox, so how hard can it be? An online Atkins meal guide says my breakfast can be eggs, so I scramble as many as I can find with the zeal of a born-again evangelist. Shortly after, I learn that eating scrambled eggs out of a bowl without toast is basically the same as eating animal snot.

I've promised to take my girlfriend out for Sunday lunch. But Sunday lunches aren't diet-compatible, so I stay indoors and make her watch me grill the world's most miserable-looking chicken breast instead. She'll get over it.

At 3pm, the hunger comes. I pace about my flat, hungrier than I've ever been, opening and closing the fridge door in the hope that it'll conjure up a magical, Atkins-friendly trifle. I end up gnawing on a colossal lump of cheddar until I feel sick. No vomiting, though - those precious calories aren't getting away that easily. Dinner is steak and steamed vegetables, followed by a contraband Magnum that my girlfriend cruelly convinces me to eat as revenge for not taking her to lunch. I've consumed only half the calories I normally would, but this slip-up stings.

What is it?A diet based on what humans ate 2.5m years ago, because cavemen were thin and didn't have diabetes.

What can you eat?Fish, meat, vegetables, fruit, nuts.

What they say "The world's healthiest diet."

What Stuart says I'm training for a 12-mile endurance event and don't want my lessened calorie intake to hinder my progress. So, despite feeling weak, I do a spin class. I get tired much faster than normal and barely finish the session.

However, the Paleo diet agrees with me. Fruit is allowed, so I can snack on things that don't make my breath smell like a chiropodist's bin. Breakfast is two fried eggs, a grapefruit and blueberries. It keeps me going until lunch, which is a beef stir-fry that costs £10 to buy, 20 minutes to make and three seconds to eat. No wonder cavemen looked so grumpy.

Another upside to dieting: no going out. I spend my life avoiding things, so this is perfect. Tonight I skip a birthday party by reminding everyone that cavemen didn't eat cake. Instead, I stay in and cook trout. I'm supposed to eat all the trout - even the eyes - because this is The Paleo Way. The Paleo Way is also to walk about barefoot.

Still, I end the day feeling rather chipper about this dieting lark. Bring on tomorrow!

What is it?A diet tailored specifically to your blood type.

What can you eat?It depends. Type A people (like me) should have a vegetarian diet free from dairy, flour, potatoes and acids. Type Os have much broader choices.

Drawbacks Incredibly restrictive, no real scientific proof to back it up.

What they say "A way of eating and living that has transformed the health of millions."

What Stuart says I'd normally do a 10k run today but, with about three lonely calories rattling around inside my empty ribcage, I manage barely a quarter of that. I sweat abnormally. I feel dizzy and weak. My chest is tight. I'm incredibly thirsty. This can't be good.

The Blood Type diet can piss off. It seemed quite interesting until I realised what crap blood I have. People with type A blood shouldn't eat meat. Or carbohydrates. Or do any exercise. Or have fun. Breakfast is fruit. Lunch is a salad of lettuce, celery, carrot and eggs that takes 45 minutes to get through. Dinner is a great big depressing bowl of flavourless stir-fried vegetables. I hate whoever invented this diet. If I met them, I'd happily punch them. Or I would if I had any energy.

I stay indoors all day, mainly because if I were to meet anyone with type O blood - those effete, entitled, Little Lord Fauntleroy bastards who can eat whatever they want - I'd lash out and kill them with my hands and teeth. Let me be clear: the Blood Type diet is the least fun I've ever had.

What is it?A diet that lets you eat whatever you want one day, so long as you don't eat more than 500 calories the next.

What can you eat? Anything, so long as you stick within the calorie limit.

Drawbacks Impractical and psychologically tough. Also, if you gorge on non-fasting days, you render it somewhat useless.

What they say "It lets you focus hunger in manageable periods - instead of being a little hungry all the time, you're very hungry a little of the time."

What Stuart saysThere are approaches here. I could eat one amazing thing - like a Snickers or a Big Mac - or I could spread out my 500 calories sensibly across the day. I choose the latter and eat a banana, half a bowl of soup, a tuna steak and a stick of celery. But I eke it out as best I can by staring longingly at my banana for 45 minutes and then dissolving it in my saliva over the course of another hour.

And yet I don't feel hungry. Don't get me wrong, this stupid diet has taken over my life. It's all I can talk or think about. But compared with yesterday's joyless stalk-chewing, today has been a breeze. What's more, I didn't end today's gym session shaking, exhausted and trying to squeeze up nonexistent vomit.

That said, I've realised I could have got away with doing the all-you-can-eat half of this diet today. I could be knee-deep in a barrel of doughnuts by now. What a div.

What is it?The world's first GI (glycemic index) diet, focusing on foods that keep you feeling fuller for longer. The lower the GI, the better.

What can you eat?Lean meat, fruit, vegetables, legumes and whole grains.

Drawbacks A food's GI is dependent on the brand, the cooking method and its surrounding food. As such, it's difficult to follow to the letter.

What they say "The only totally balanced diet."

What Stuart says I slept better than I have for weeks. I wake up full of energy and I'm starting to look trim. It might be Stockholm Syndrome, but I'm starting to enjoy myself.

Perhaps it's because I get to eat normal food today. In relatively normal amounts. A lot of the Montignac diet requires special Montignac-brand ingredients, but I can't be fussed with that nonsense and pick up the nearest low-GI equivalent. Breakfast is muesli and a grapefruit. Lunch is a bowl of vegetable soup and dinner is spaghetti bolognese. Well, it's one piece of minced beef balanced precariously atop a miserly pile of pasta - but I don't care. It's food. I can barely stop myself eating it out of the saucepan. I make sure to wring every last atom of pleasure from it.

This is because I know what's coming tomorrow.

What is it?Popularised by Beyoncé, it shuns solids in favour of several glasses of lemon juice, water, maple syrup and cayenne pepper.

What can you eat?That alone.

What they say "Will prove that no one needs to live with diseases."

What Stuart says Whatever energy I had yesterday has vanished. For the first time this week, I skip the gym in order to lollop about in a onesie. The day starts with an "internal salt bath" - two teaspoons of sea salt dissolved in warm water that works as a laxative. Even though the size of my poos has decreased over the week (they're teeny-tiny, button-cute, Japanese-looking things), the salt's effects are sneaky and explosive. A onesie is not the thing to wear on the panic-stricken edge of sudden diarrhoea, it turns out.

And then it's on to the lemonade - a gruesome, grainy, too-sweet, too‑sour, too-spicy glass of damp ashtray muck. Every two hours I stand up, feel dizzy, grimly mix another batch, then sit back down at my desk, too hungry to concentrate on work. The natural breaks that form around mealtimes have vanished. The day is long and flat, without happiness of any kind.

I planned to go to the cinema with my girlfriend but I cancel because I'm scared there'll be a loud noise and I'll end up accidentally shitting myself. I am a catch.

You're supposed to do the Master Cleanse for 10 days. I know someone who has. She says she felt hollow by the end. I already feel like that.

What is it?A protein-heavy diet that allows you to eat as much of 100 types of food as you like.

What they say"Unique and truly personalised weight-loss coaching."

What Stuart says I can eat food again. Scrambled eggs, smoked salmon, turkey burgers and beef. Admittedly just a fleck of beef on a plate, but after yesterday I'd probably eat someone's blister without much protest.

I've kowtowed to dieting all week, to the detriment of my social life, so today I get things back in order. I invite a friend round and we bake non-diet food for tomorrow. I fight an almost uncontrollable urge to grab a loaf of banana bread and rub it up and down my face.

I'm relieved this week is ending. I've lost almost 8lb by the time it's over, which is probably too much - the recommended Weight Watchers weight loss is a quarter of that, and I resemble a sort of crap blond lollipop - but I know which diets I'd go back to. The faddiest ones - the Master Cleanse and the Blood Type Diet - are hideous and pointless, but the principles of the rest more or less make sense. Eat less sugar, eat fewer processed foods, eat everything in smaller amounts, move around a lot and you're on the right track. I'll take all this into consideration in the future. But not tomorrow - I've got a mountain of cake to devour first.

'For seven days, I was little more than a nutritional lab rat.' Photographs: Pal Hansen for the Guardian