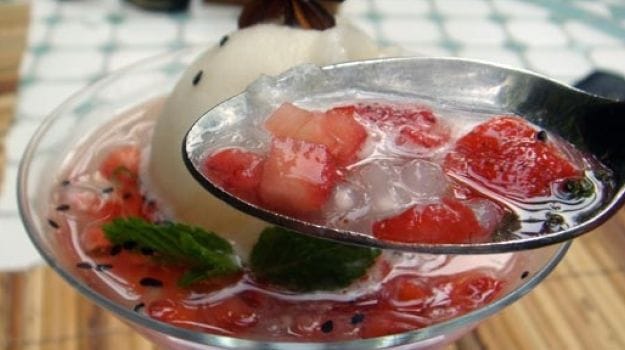 It may be loathed by the older generation, but tapioca is a staple in many cuisines. Now a growing number of celebrated chefs are elevating it beyond bowls of milky gloop.

Fish eyes, frogspawn or eyeball pudding – synonyms for Britain’s most hated school pudding, tapioca. Loathed by the older generation, and largely unknown by the younger, milky tapioca pudding’s bad rep, and the dish itself, has all but faded into obscurity. “Lots of people associate tapioca with boarding school or school dinners,” says Brett Graham, head chef at The Ledbury, “but that tends to be the older generation, so things are changing”.

Graham, who grew up in Australia, is just one of a growing cohort of celebrated chefs elevating tapioca beyond bowls of milky gloop. It turns up in sweet and savoury forms at his two-Michelin-starred restaurant in Notting Hill. He’s far from alone - chefs around the world love it. At The French Laundry in California, Thomas Keller serves it with oysters, the small pearls suspended in an oyster-infused sabayon; Michel Roux Jr cooks tapioca in squid ink and teams it with calamari and garlic butter at Le Gavroche. In his São Paulo restaurant, DOM, Brazilian chef Alex Atala serves tapioca pearls in a sharp manioc-root extract tucupi with giant river fish pirarucu. Heston Blumenthal used tapioca flour, masquerading as sand, in his seafood ensemble Sound of the Sea.

But it’s not just the preserve of Michelin-starred chefs. Tapioca starch, extracted from manioc (cassava), is sold in a number of guises, from flour to flakes, pearls of varying sizes, and precooked “instant” tapioca. It’s cheap, too – around £1 for a 500g bag of pearl – and it’s a staple in many cuisines. In Brazil, it’s an everyday ingredient, savoured in bite-sized cheese breads (pão de queijo), as puffed biscoito globo crisps, boiled up with red wine, sugar, clove and cinnamon as sagu de tapioca, or melted into crepes (beiju) that are stuffed with everything from sun-dried beef, to coconut and condensed milk.

As Atala points out, tapioca is used a lot in Asia, “and so Europeans know it as an Asian ingredient,” having made its way east from Brazil with the Portuguese in the Age of Discovery. In India, sabudana (tapioca pearls) are boiled up with sweetened milk in a pudding that was perhaps the precursor to our milk pudding. Or mixed with potatoes, peanuts and spices in sabudana vada (fried dumplings) or sabudana ni khichdi – a popular sautéed dish on fast days in Gujarat and other Northern Indian states. Tapioca flour is also used to make crispy papad and coconut rolls (puttu) in Malayali cuisine.

“In Thailand, tapioca is used for thickening sauces, and to make a few desserts,’” says Thai chef Yui Sriyabhaya, who describes a handful of desserts all made with coconut milk, palm-sugar syrup and tapioca in varying forms, such as the fat worms of boiled tapioca dough in krong kraeng, or the green (dyed with pandan leaves) tapioca jelly matchsticks in lod chong Singapore.

Marina Pipatpan, Thai chef-owner of São Paulo restaurant Tian, remembers growing up in Thailand with similar desserts that mix saku (tapoioca pearls), syrup and coconut milk with black beans (saku tua dtam) or crunchy corn kernels (saku kao pod). “My favourite is an ancient dish that’s still popular to this day – saku sai moo. We cook ground pork with sugar and add peanuts and make a ball that we then wrap in tapioca pearls and steam,” she enthuses. Similar dumplings and desserts can be found in other Southeast Asian cuisines, including Korea, Indonesia and China. Not to mention Taiwan, the country that started the craze for bubble tea in the 1980s, with western youth en masse slurping up shiny tapioca pearls through fat straws, and franchises making or breaking based on their ability to cook the pearls to perfection, between bouncy and chewy.

Tapioca is the perfect blank canvas; its capacity to hold colour, to absorb and release a burst of flavour (my favourite is tapioca pearls cooked in soy), and its versatile texture are exactly why chefs love it.

So how to get it right at home? “Cook it till you have just the tiniest pinprick of white left in the centre,” says chef Alyn Williams. “Tapioca pearls should be soft and silky.” For Brett Graham, the secret is in soaking the pearls in milk or stock first (the former for sweet and the latter for savoury), then rinsing them and cooking them in plenty of milk or stock, and rinsing again afterwards to remove any excess starch. Do you dare have a go? It’s time for tapioca’s domestic comeback.