Cornstarch, Arrowroot & More: The Different Kinds of Starch You Should Know About 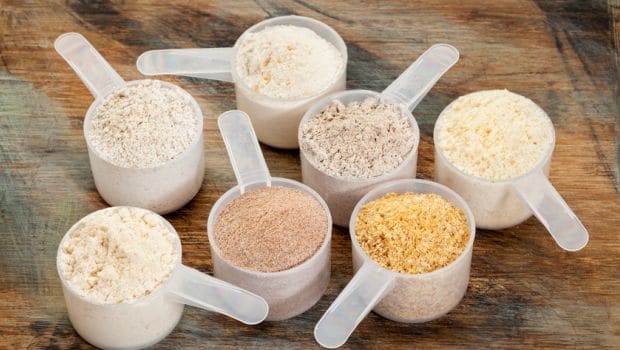 Highlights
The building blocks of a gluten free kitchen start with different types of starches. You may often used them to thicken sauces, stews or in soups. They are mostly powdered and when mixed in water they turn creamy and thick literally in seconds.

So, what exactly is a starch? Starch or amylum is a polymeric carbohydrate consisting of large number of glucose units joined by glycosidic bonds. It is produced by most green plants and is a storehouse of energy. And what does it give to your diet? It is a great source of carbohydrate in its natural form. It is found in food staples like rice, potatoes and maize.

There are different kind if starches available in stores and they differ according to how fast they thicken, the quality and flavour they add to the dish. Starch can be found in two varieties native starch and modified starch. The first is a natural derivative of the vegetable and the second is chemically modified as a thickener. The most common starches used in in gluten free cooking are: corn starch, arrowroot starch, tapioca and potato starch. In order to choose the right one, you need to understand each of their properties. Here's all the help that you need. Cornstarch: Cornstarch, cornflour or maize starch is the starch derived from the corn (maize) grain or wheat. The starch is obtained from the endosperm of the kernel. Corn starch is a popular food ingredient used in thickening sauces or soups, and is used in making corn syrup and other sugars.

Arrowroot Starch: Arrowroot is a starch obtained from the rhizomes (rootstock) of several tropical plants, traditionally Maranta arundinacea, but also Florida arrowroot from Zamia integrifolia, which is often labelled as arrowroot. Japanese arrowroot, Pueraria lobata, also called kuzu, is used in similar ways. It can also be used as a thickener for acidic foods, such as Asian sweet and sour sauce. It is used in cooking to produce a clear, thickened sauce, such as a fruit sauce. It is called “Sheshumul”

Tapioca Starch: Tapioca is a starch extracted from cassava root. It is also called as sago or sabudana in Hindi. It is made by crushing raw tapioca roots in a tank and the juice obtained is stored till it turns into a paste. This species is native to the North Region of Brazil, but spread throughout the South American continent and Asia. A staple food in many world regions, tapioca is used as a thickening agent in various foods.

Potato Starch: Potato starch is starch extracted from potatoes. The cells of the root tubers of the potato plant contain starch grains (leucoplasts). To extract the starch, the potatoes are crushed; the starch grains are released from the destroyed cells. The starch is then washed out and dried to powder. Potato starch is a very refined starch, containing minimal protein or fat. This gives the powder a clear white colour, and the cooked starch typical characteristics of neutral taste, good clarity, high binding strength, long texture and the resulting solution has a minimal tendency of foaming or yellowing.

Starches can be very easily contaminated with refined wheat flour and most starches available are not certified. It is imperative to buy only starches manufactured by a 100% gluten free facility. Starch is a major reason for contaminated gluten free products. All ingredients will be gluten free but starch can be overlooked very easily. Be careful about dishes that may contain starch when eating out.

Aarti Sarin Jain is an avid baker and runs an exclusive gluten-free test kitchen. She discovered the joys of a gluten-free living after her elder kid was diagnosed with Celiac Disease. She often experiments with new forms and varieties of gluten-free food without compromising either on taste or quality. You can read more on her blog, www.bakingfrommyheart.com.