The Care and Feeding of a Picky Spouse 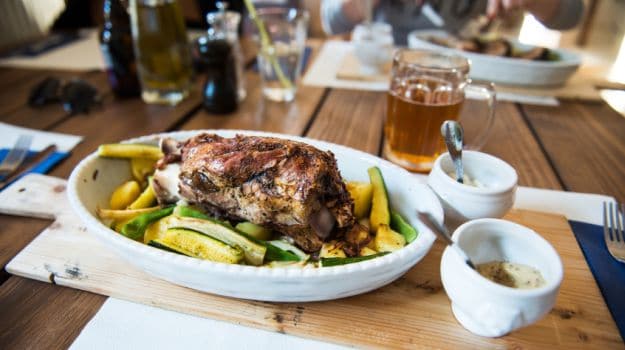 My husband and I were not well matched on paper. When we met, I was a vegan, while Peter regarded any vegetable that was not a carrot or a pea with the deepest suspicion, and frankly, he wasn't all that sure about the peas.

In matters of restaurant meals, we were also deeply at odds. I have a basically communist approach to ordering: Maximize the available options that are congenial to the whole table, so you can happily spend the meal spearing things from one another's plates. Peter would stab you with his fork if you attempted to filch some of his dinner.

Every married couple quickly discovers the irreconcilable differences that will provide many lively hours of conflict well into their golden years. This was one, and one of the loudest, because one eats so very often. I was raised by a woman who made her own croissants, and aside from a congenital aversion to cooked fish, I will eat anything that doesn't eat me first. Peter disliked almost all vegetables, most sauces, and the very idea of things he hadn't eaten before.

I read up on picky eaters. The prognosis was grim. While childhood picky eaters often grow out of it, adult picky eaters apparently don't, whether it is habit, anxiety or some genetic ability to taste things that the rest of us don't in strange foods.

If I didn't care much about food, that wouldn't have mattered. But I do care, passionately, and it was hard to imagine either giving up the large share of my life that centered on food, or walling that portion off from the person I'd chosen to share my life with.(c) 2016, The Washington Post

For a while, I tried cooking only things I knew he'd like. These things were, to my palate, heavy and boring for everyday eating. I gained 35 pounds. Then things got busy and we stopped eating dinner together so often, and the weight fell off.

I tell you all this by way of introducing a conversation we had a year or two back. I served a roast chicken with a chickpea-and-raisin tagine. "I like it, but you don't have to eat it," I told him. He looked at me, and took a tiny spoonful, featuring one carrot, three chickpeas and a raisin. A few moments later, he looked up at me and said, "You should make this as a main course sometime."

Over the following months I kept asking the same question, with increasing concern, as he asked for sautéed mushrooms, sausage ragu, poached-egg-and-arugula salad. To be honest, he's now less picky than I am.

I have presented his transformation as a single cinematic moment. In fact, it was the culmination of a long process, one that I wasn't sure was going to work. Some of what we did was fortuitous, but quite a lot of it was deliberate choices that we both made. Here's what I learned about the care and feeding of your picky eater.

--Your picky eater has been picky for a long time and won't stop overnight. Foodies forget what a nervous experience it used to be to try new foods. So we tend to get impatient with apparently competent adults who are made anxious by the prospect of a Brussels sprout.

Well, different things make different people anxious. My husband steps up manfully when I see a big ugly bug and start hopping around, shrieking. Just think about something that makes you anxious, then think about your spouse saying: "Come on, get in this big bathtub full of roaches. You'll like it once you try it." Be patient.

--Picky eaters make things worse by deciding they won't like something before they try it. They eye it suspiciously. They are irritated with you for making them do this. They take one sullen mouthful. Then they grimly confirm that they hate it and never want to see it again. If you are a picky eater, that means that you need to acknowledge that you absolutely are contributing to your own pickiness by getting stuck in it. As soon as my husband relaxed about new foods, he became magically more likely to enjoy them.

My years of hating fish, and being forced to eat it, also make the experience worse. When I go in thinking, "Oh, God, cooked fish, it's going to be disgusting, and then I'll have that taste in my mouth, and everything is awful!," things are really bad. They're much less unpleasant when I go in thinking, "I'm going to take one bite, and I'm going to try to taste things people might like in it, and I have a Diet Coke right here to wash the taste away if it's too much."

--Becoming your spouse's adversary makes things worse. Because we spouses can see our picky eater steeling themselves to hate things even before they know what it tastes like, it's easy to get irritated. That only guarantees that both of you are going to be grumpy. Instead, try saying: "This is an important part of my life. I'm asking you to try to keep an open mind and try new foods and restaurants even though I know it's really hard for you, because it would make me happy." Don't make this into a test of their reasonableness, or flexibility. Just ask them to do it as a gift to you.

--Try tasting menus -- with an option to stop at any time. Because my husband is a generous man who will make heroic sacrifices for his wife, he has booked a table at a high-end restaurant with a massive tasting menu, and one at an upscale restaurant. I don't know that this strategy will work for everyone. But for us, these were milestones. In part because he went in in a generous frame of mind -- he was doing this for me, not him, and it was OK if he didn't like the food -- Peter was able to relax and try things. He started discovering the joy of complicated flavors and presentations. He got a better sense of what it was I liked about restaurant meals that went beyond a nice juicy steak. And when I tried to replicate a restaurant dish, he approached it in a much more friendly way than he would have if I'd just slapped it onto his plate. Even if you're not going to a restaurant with a fancy tasting menu, you can order something they'll find strange, and then offer them a bite. If they say they don't like it, say "OK" and eat it yourself. But if you offer them enough bites, they'll probably find something new they do like.

--Repeated tastings acclimate people. This is a general phenomenon -- if you eat something over and over, chances are you will at least learn to not mind it. The picky eater should remember that people can and do learn to like flavors they can't stand -- my husband went from loathing artichokes to loving them. The non-picky eater should remember that the dose makes the poison. Ask them to take one or two bites of something, then if they don't like it say "OK" and go on with your meal.

--Ask them what they don't like. It's not always the same thing: sometimes it's flavor, sometimes texture. Often these can be fixed by making the disliked flavor less strong, or presenting it in a format that isn't mushy, greasy, rubbery or otherwise unpleasant. Artichoke hearts, for example, can be deep fried so that they are appealingly crispy, rather than strange and leafy. Often, after your picky eater has learned to enjoy the new texture, you'll find they like the flavor enough to try it in other forms. And don't be afraid to deep fry. It's not good for you, but you're not doing it every day. And it makes a lot of foods appealing to people who otherwise wouldn't like them.

--Combine foods they don't like with ones they do. Brussels sprouts in cream sauce were not a hit , but Brussels sprouts with bacon? Best seller. Don't try to disguise the food as something else , but-add flavors they like, such as bacon, cheese or soy sauce. Or change the proportions of a dish like a salad so the things they don't like are relatively unobtrusive compared to things they love.

- Don't serve something they don't like and hope they won't notice. Probably there's some food you don't like, and what are the chances you wouldn't notice if someone slipped it into your dinner?

--Don't give up just because they didn't like it the first time. Wait a few months and try again. As they learn to eat more foods, their tastes will change, and previously hated foods can suddenly become appealing.

--Dissect your dishes. If you're a foodie, then part of the joy is talking about the food you're served. Too much garlic? Too little? Is the fennel really adding to the dish? It takes the focus off of "Oooh, is that gross?" and puts it on all the different things that are happening in a dish.

--Unleash the power of the side dish. I used to make a rookie mistake: I'd make something without knowing whether Peter would like it in hopes that he would. Often he didn't, and oops, that was all we had for dinner. In fact, I made it more likely that he wouldn't like it because I turned the whole thing into an anxious confrontation with a strange enemy, instead of a casual meet-and-greet. Now I make a new food for myself and give him a bite.

--Don't forget to cater to them, too. Picky eaters trying to eat new foods are making a big sacrifice. I know it doesn't feel that way to you, but remember the bathtub full of roaches and imagine that your spouse is voluntarily climbing into that bathtub once or twice a month just because it makes you happy. Then remember to be grateful, and try to enthusiastically embrace their favorite old standards.

--Accept goals short of perfection. If your picky eater eats 10 foods, then adding only five foods means a 50 percent expansion of your options! Every time they add a new food, you both win.

I won't claim that with patience you'll end up as I did -- with a spouse who enthusiastically orders every strange thing on the menu. But if you have a partner who's willing to at least try to eat a few more foods, there's a good chance you can end up with a more varied table, and a much happier companion to share it with.
_ Megan McArdle is a Bloomberg View columnist writing on economics, business and public policy.