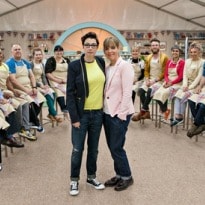 GBBO, back on our screens tonight, is inspiring young people. But, as I can testify, it's not just about being cool

After a big night out, or a long day at work, I can often be found browsing the cookery aisle in the supermarket looking for raisins or the right kind of flour. The stresses of life always seem to lead me towards the kitchen - perhaps not to eat my feelings, but to bake them. A miserable period in my life last year found me retreating into the comforting embrace of recipe books, whose ingredients always promised to take my mind off my troubles. I could immerse myself in them for hours.

So it's not surprising to me that a new survey suggests people aged 25 to 34 are the ones most likely to bake at home these days. Indeed, while 40% of this age bracket said they cooked from scratch once a week, only a third of the over-65s said they had baked from scratch in the past year. The Great British Bake Off (which starts again tonight) has surely been instrumental in inspiring young bakers to don an apron at home and attempt to create the perfect roulade or whip up a creme brulee. According to the survey, a quarter of those aged between 25 and 34 said that cookery programmes such as GBBO encouraged them to try out their own culinary skills.

This was how I started out too. The first ambitious bake I attempted was creme patisserie doughnuts. They took me at least three hours, and required an intense concentration that I wasn't used to (the internet has robbed me of that), but the end product was intensely satisfying. I had made something with my own two hands! I had a physical result sitting in front of me - and, even better, I hadn't had the opportunity to worry for an entire evening. This unexpected side-effect seemed like such a positive one, I was soon looking for more complicated recipes. I made eclairs, profiteroles, mousses, croissants, tarts and ice-cream. I found the best recipe for salted caramel, and I became the proud owner of a superior piping bag.

Since the rapid success of GBBO, much has been made of the trend for younger people to embrace the wooden spoon, with many suggesting that baking has become hip. After all, the blogger Rachel Khoo, and the model Daisy Lowe are both held up as the face of young baking: beautiful and cool, and a far cry from Julia Child or Mrs Beeton.

But is it more than just a new hobby for the cool crowd? In an age filled with austerity and uncertainty about jobs and property, it seems only natural that young people would look for something cheap and comforting to do, and baking fits that bill magnificently. Not only is it a fairly economical pastime, but there are reams of anecdotal evidence that baking can help lift your mood. The author Marian Keyes wrote a recipe book as a testament to how much cooking had helped her through depression, saying: "Baking hasn't cured me. But it gets me through ... To be perfectly blunt about it, my choice sometimes is: I can kill myself, or I can make a dozen cupcakes. Right, so I'll do the cupcakes and I can kill myself tomorrow."

At my saddest moments, methodically beating a cake mix or kneading dough gave my brain little chance to seek out dark places. Creating something that might curdle, burn or collapse is so all-encompassing and immediate that you are forced to tear yourself away from any other problems you might have dwelt on. For the younger generation, juggling a number of very real problems, making yourself concentrate on a batch of macaroons can be a surprisingly helpful break.

While the baby boomers might be having too much fun to spend hours in the kitchen (the overall number of people baking has fallen slightly), it seems that my generation has embraced the therapeutic results of a couple of hours with a Magimix. Soon, when the nights draw in and our summer slowly fades, surely the thought of comforting aromas from the oven will encourage even more of us to pick up a cookbook and get baking.

The line-up for the new series of The Great British Bake Off, starting tonight. Photograph: Mark Bourdillon/PA