Juicy Kebabs From Morocco on Your Platter 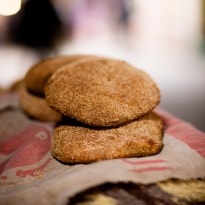 Are you a kebab freak and do you love exploring kebabs from different regions? Then Zerzura is the place for you, offering authentic juicy kebabs from the Middle-East and Morocco on your plate.

Recently opened Zerzura, a Middle-Eastern and Moroccan lounge at the Clarion Collection here, is the brain-child of Shagun Somani, who already has another venture -- a concept cafe called Hinglish - The Colonial Cafe in west Delhi's Pacific Mall. Before turning a restaurateur, he had worked in a multinational company.

The multiple varieties of mouth-watering kebabs offered here are to die for. Kebab Tabei, one of Zerzura's specialities, is served in the same pan that it is cooked in. Teamed up with tomato chunks and burnt whole garlic, the succulent burst of flavours promises you a delightful gastronomic experience. The dish is something you cannot miss.

Some of the common spices used to cook kebabs are saffron, paprika, cinnamon, bayleaf, cummin, and cardamom.

To woo the taste buds of kebab aficionados, the eatery offers varied options of fish, chicken and lamb kebab.

If just kebabs are not enough to satiate your appetite, convert it into a complete Middle-Eastern/Moroccan meal by adding saffron rice, pickles and a dip.The aroma and the explosive flavours of kebabs will transport you to the royal country and Chef Nawal Prakash, cuisine trainer at Zerzura, told IANS: "We do not want to deviate from the original taste."

"The presentation and the food... everything is the same as served in the Middle-Eastern countries and Morocco. We want our customers to get the original taste," he added.

The restaurant not only sticks to the Middle-Eastern and Moroccan tastes and flavours, but also tries to bring the same ambience.

The outdoors, an air-conditioned space, has two gazebos, a semi-private area that has an individual seating space for 8 to 10 people, which looks more like a sanctuary with glass roof giving a view of the sky and greenery around.

The restaurant also has special nights. On Wednesdays, over kebabs you can enjoy performances by international belly dancers. If you are a Sufi music fan, Friday is the day when you can pamper your taste buds while relishing live Sufi song performances.

Although kebabs are their speciality, the multi-cuisine restaurant has a lot more to offer - from sandwiches and shawarama to mezze as well as an entire menu of tagine's and Middle-Eastern and Moroccan main course delights. You can also try some tapas with your drinks too over the bar counter.

Promoted
Listen to the latest songs, only on JioSaavn.com
As they say, no meal can end without a dessert, so I wrapped up my meal by ordering Zerzura dessert sampler, which was a combination of date and fig gratin with rosemary and honey ice cream; hot chocolate pudding with white chocolate sauce; baklava with pistachio ice cream and M'hanncha.

Each of the dessert is tempting, but baklava with pistachio is to die for.