1,000 'Cheeky and Chatty' Robots to Sell Espresso Machines in Japan 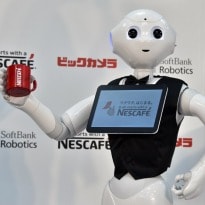 Move over George Clooney - Nestle has employed a fleet of chirpy robots to sell its coffee machines in Japanese stores. The Hollywood heartthrob, who has become the global face of the Nespresso brand, has been given the elbow in favour of Pepper, a cheeky and chatty android, which its makers claim can answer customers' questions. (More: Restaurants Where Robots Cook & Serve Food.)

"How do you enjoy coffee? Number one: An eye-opener coffee; Number two: A post-meal cup of coffee," Pepper asked a TV personality at a promotion event on Monday. The 120-centimetre (four-foot) tall robot has a human-like face perched on top of a white plastic body, with rollers and what looks like a tablet computer on its chest.

The gimmick will eventually see 1,000 stores across Japan with their own Pepper, which makers say can understand up to 80 percent of conversations. The robots will "help us discover consumer needs through conversations between our customers and Pepper," said a joint statement from Nestle and SoftBank, whose French arm Aldebaran developed the technology.

Pepper, which was unveiled in June by SoftBank president Masayoshi Son, already sells mobile phones at SoftBank's 74 Japanese stores, where it has been used to collect customers' opinions. Engineers claim the robot's artificial intelligence has allowed it to expand its conversational ability by listening to what customers say.

Promoted
Listen to the latest songs, only on JioSaavn.com
The robot will go on sale to the public in February, with a price tag of 198,000 yen ($1,670) plus monthly fees.

George Clooney, meanwhile, will not.